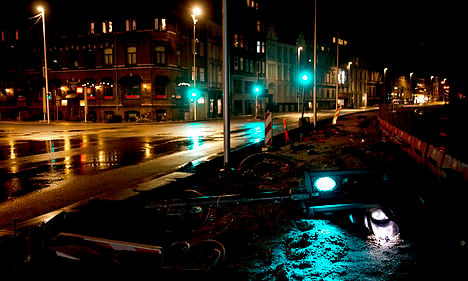 Gorm the Storm left a mess in parts of Denmark. Here, a traffic light in Aarhus buckled under the winds. Photo: Mikkel Berg Pedersen/Scanpix
The Danish Meteorology Institute (DMI) said that Storm Gorm brought hurricane-strength winds to several parts of Denmark on Sunday as it moved westward across the country.
The highest wind strength was measured at Sjællands Odde on Sunday night, at 165 kph. The winds were at 144 kph at the Blåvandshuk Lighthouse in western Jutland when Gorm made landfall at around 7pm. Speeds of 32.6 mps or 117 kph and above are officially considered hurricane-strength.
The storm cancelled train traffic and several bridges on Sunday evening, but traffic was only expected to be minimally affected on Monday morning.
“We anticipate here this morning [Monday, ed.] that the after-effects of Storm Gorm will only affect train traffic to a slight degree and that we can operate smoothly with the exception of Kystbanen [the Coast Line that runs between Helsingør and Copenhagen] and Grenaabanen [the Grenaa Line between Aarhus and Grenaa],” rail operator DSB wrote on Monday morning.
DSB also said that early morning departures for the ferry to Bornholm were also cancelled.
The rail operator is keeping commuters updated here (in Danish).
The Little Belt bridge connecting Jutland and the island of Funen, the Great Belt Fixed Link (Storbæltsbroen) between Funen and Zealand and the Øresund Bridge connecting Copenhagen to southern Sweden were all closed to vehicle traffic on Sunday evening but were reopened by Monday morning. Several bridges, including the Little Belt (pictured) were closed to traffic on Sunday evening. Photo: Claus Fisker/Scanpix
DMI issued warnings for the whole of Denmark, with the west coast of Jutland hit first before the Gorm  made its way west across Jutland. Early on Monday, the storm had left more than 50,000 residents in Sweden without power.
At the height of the storm, police in Southern Jutland and the island of Funen advised residents to remain indoors and several other police districts recommended avoiding all unnecessary driving, warning of downed trees and flying tiles.
On Monday morning, police cautioned that commuters would encounter Gorm's aftermath and encouraged people to leave for work early and drive with caution. Copenhagen Police wrote that cafe chairs and boards were strewn across streets in some areas:

On Saturday, 150 asylum seekers were moved from their tent camp in the northern Jutland town of Thisted in advance of the storm.
The storm was christened Gorm by DMI according to an international convention by which storms are named in alphabetical order, alternating between boys’ and girls’ names.
Freya, the last big storm to hit Scandinavia, came in early November.