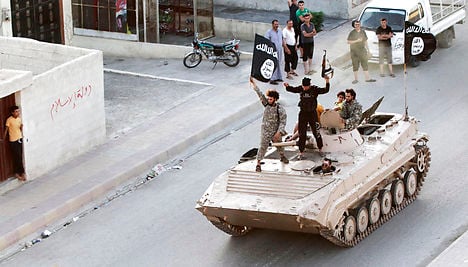 The man posted a video allegedly produced by the terror group Isis. Photo: Stringer/Scanpix
East Jutland Police announced on Friday that, in co-operation with the Danish Security and Intelligence Service (PET), officers arrested a man on Thursday for posting a video showing executions along with comments that police considered to be a threat.
The video is believed to have been produced by Isis, also known as IS, and shows a series of people buying murdered for alleging spying on the terror group. The text the man posted along with the video was construed as a threat by police and PET as seen as endorsing terror.
“The 19-year-old’s text on Facebook must be understood as a threat that others who spy on IS will suffer the same fate as the people in the video. On top of that, we are charging him for having put forth a more general threat to kill infidels. He is additionally charged with expressing approval for the terror actions shown in the video,” East Jutland Police spokesman Jesper Bøjgaard Madsen said.
See also: Danish mosque doubles down on Isis support
Madsen said he hoped the arrest would “have a preventative effect in relation to others who are sitting at their computer and considering doing something similar”.
“Together will PET, we are keeping an eye on these things and are now sending a strong signal that one should refrain from carrying out such actions because there is a risk of being charged with violating one of the most serious sections of the penal code,” he said.
The 19-year-old, who police said is a Danish citizen, will be charged with two crimes: threatening to commit terror and expressing approval of terror.
See also: Denmark's jihadist rehab: school, sport and Islam
The man was arrested in Aarhus, Denmark’s second-largest city and home to a controversial ‘jihadist rehab’ programme.
At least 30 people have left Aarhus to fight in Syria and Iraq since 2013, accounting for a large percentage of the estimated 125 who have done so nationwide. Per capita, Denmark produces the second-largest number of foreign fighters behind Belgium.