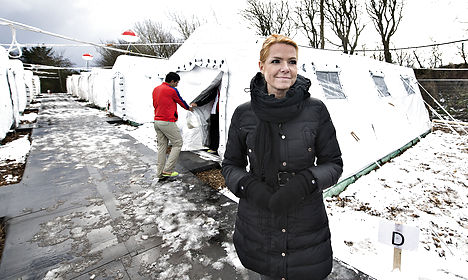 The government's newest round of stricter asylum laws were approved by parliament last week as an “urgent” proposal, meaning that the time frame between the publishing of the proposed law changes to their approval by MPs was shortened from four weeks to just three days.

Both the specific changes – which include housing asylum seekers in tents, increasing detainment periods and extending family reunification waits to three years – as well as the hasty way in which they were pushed through parliament have been criticized by legal experts as well as human rights organizations.

The changes to Denmark’s asylum rules in full

“We cannot believe that such comprehensive changes can be approved with a 48-hour tour de force through parliament,” Torben Jensen of the Society of Lawyers (Advokatsamfundet) told Politiken.

“For example, the subcontracting of the use of force, such as handcuffs, to private companies and the idea that the minister of integration can suspend the right of a detainee to see a judge within a 72-hour period is strict stuff that does not belong in an urgent approval,” said Jensen, who also questioned how long the period of detainment might then be allowed to last – a question that Integration Minister Inger Støjberg refused to give an outright answer to in parliament on Friday.

The issue of detainment of asylum seekers was also focused on by the Institute for Human Rights (Institut for Menneskerettigheder), who have accused the government of violating human rights with its new asylum laws.

“If you want to practise within the framework of the court, there has to be a deadline [for the detainee to be seen by a judge, ed.]”, director Jonas Christoffersen told Politiken.

Amnesty International accused the government of “encouraging increased numbers of arrests of foreign nationals as well as weaker judicial control. This is, to say the least, an unfortunate combination.”

The government defended the urgent nature of the implementation of the new laws by claiming that “acute problems” meant that they “could not wait”, citing the increased number of refugees now entering Denmark as well as numbers of asylum applications.

Støjberg told parliament on Friday that the new laws regarding detainees would only be used in “special circumstances”. While not defining those circumstances specifically, Støjberg referred to the events of early September, when hundreds of refugees crossed Denmark’s border at the Rødby ferry terminal and at the land border with Germany, where the E45 motorway was closed by police due to the high numbers walking on the carriageway.

Morten Knuth, a spokesman for government party Venstre, dismissed the judicial nature of the criticism of the laws, stating that they had been examined by the party’s own international lawyers before reaching parliament. Knuth also referred to “special circumstances”, referring to the recent border closures by Sweden.

“We could suddenly be faced with so many asylum seekers that it would be impossible in a practical sense to guarantee an appointment with a judge within a given deadline,” Knuth told Politiken.