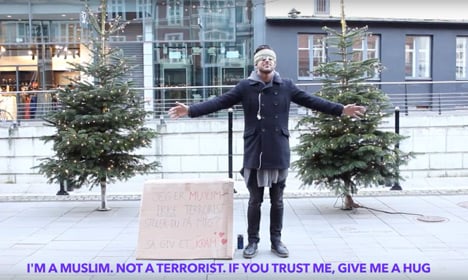 Screenshot: Arian Planet/YouTube
Arian Kashef has been posting videos of pranks and social experiments to YouTube for over two years, often poking fun at perceived differences between Danes and immigrants.
But in the wake of the Paris attacks, in which 130 people were killed by Islamist extremists, Kashef decided that his newest video should bring the ‘blind Muslim trust experiment’ that has been a viral hit in several other countries to Denmark.
“This video has been done in several countries but I felt we needed to do this in Denmark because we are so afraid of the unknown here in Scandinavia and are held back. We want to bring this up so we can show people that everybody needs to be respected regardless of their religious beliefs,” Kashef told The Local.
Kashef took to the streets of Aarhus, Denmark’s second-largest city, with a sign reading “I’m a Muslim, not a terrorist. Do you trust me? Then give me a hug.”
With arms outstretched and a scarf covering his eyes, Kashef waited for Danes to react. While the video shows many people walking by without stopping, people of all ages soon began hugging Kashef.
Kashef – whose previous videos include social experiments on racism, kindness, domestic abuse and homosexuality – told The Local he wanted to conduct the ‘blind Muslim trust experiment’ to spread a message of acceptance.
“We are so afraid these days especially because of what happened in Paris. A little love can help,” he said, adding that he received more hugs than he expected and didn't receive any negative comments.
Versions of the same experiment filmed in Paris, Stockholm, Mumbai and New York City have all racked up more than one million views each. Kashef's video was posted on Sunday and add more than 11,000 views in its first day.
Kashef's videos, most of which are in Danish with English subtitles, can be found here. He is also behind the popular Arian Planet Facebook page.

VIRAL
This Danish video is giving everyone the feels
Url copied to clipboard!