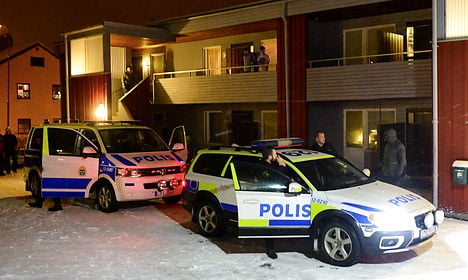 The terror suspect was arrested in northern Sweden on Thursday evening. Photo: Robert Granström/TT/Scanpix
Mutar Muthanna Majid, a 25-year-old Iraqi man accused of planning terror crimes in Sweden, was arrested after a search that included Swedish, Danish and Norwegian law enforcement officials.
Sweden's security service, Säpo, said in a press statement just before 10pm that it had arrested the man on Thursday afternoon in the northern part of the country, with the help of local police.
“The arrest took place in a calm manner and an interrogation with the person is planned,” the text added.
Säpo later confirmed to the TT newswire that the man arrested was Majid, who is said to be a member of militant Islamist organization Isis.
See more on The Local Sweden
The police raid took place at housing for asylum seekers in Boliden, run by the Swedish Migration Agency, at around 6.30pm.
An unnamed witness told regional newspaper Norran that a man had tried to hide on the balcony, where he was eventually overpowered and arrested by officers.
The Danish Security and Intelligence Service (PET) said on Thursday that it was assisting its Swedish colleagues in the search for Majid.
The Danish National Police's investigative unit NEC was also briefed by Swedish officials, as was Norway’s Police Directorate.