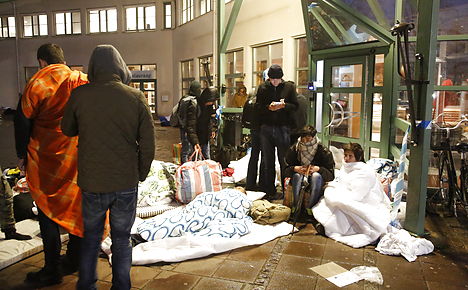 A group of refugees spent Thursday night sleeping outside of the Swedish Migration Agency in Malmö. Photo: Stig-Åke Jönsson/TT/Scanpix
Sweden’s migration minister, Morgan Johansson, told Swedish broadcaster SVT that Denmark should follow his country’s lead and set up border checks.
“Denmark should naturally also take responsibility for both the refugee situation and the security situation in Europe,” Johansson said.
“Precisely like Sweden and Germany have done, Denmark should implement border controls,” he added.
Johansson’s comments came as some 600 refugees and migrants reportedly arrived in the southern Swedish city of Malmö in just three hours on Thursday. A spokesperson for the Swedish Migration Agency told news bureau TT that the sudden influx must have been the result of some sort of incident in Denmark, although neither Copenhagen Police nor the Danish National Police reported anything unusual happening on Thursday.
See also: Refugees sleep outside amid bed crisis in Malmö
When Sweden announced its temporary border controls last week, Danish officials made it clear that the nation would not follow suit, nor would it offer to take any of Sweden’s record number of refugees. Despite pressure from his right-of-centre support parties to implement border controls, Danish PM Lars Løkke Rasmussen has insisted that border controls would only end up increasing the number of asylum seekers in Denmark.
On Friday, Denmark’s ruling Venstre party once again categorically denied Sweden’s border call.
“I can understand the Swedes’ statement because now they are seeing the consequences of the policies Sweden has followed. Of course it would be easier and more convenient for the Swedes if we implemented border control in Denmark so all of those tens of thousands of people that Sweden has attracted through its immigration polices would instead remain in Denmark,” party spokesman Jakob Ellemann-Jensen told Danish news agency Ritzau.
“We can turn it around and say that Sweden should stop carrying out policies that attract so many people,” he added.
Earlier this month, Swedish and his Danish officials engaged in a verbal back-and-forth after Johansson said that with Sweden struggling to provide enough beds for refugees, they might want to consider “go[ing] back to Germany or Denmark”.
Danish Integration Minister Inger Støjberg called the comment “neither good nor appropriate”.
“Sweden put itself in the situation it is in by carrying out extremely gentle immigration policies in every way,” she said.
See also: Denmark and Sweden in refugee war of words
Danish Foreign Minister Kristian Jensen added that the only thing Denmark would offer Sweden is “inspiration” from its hard-line approach. Jensen’s Swedish counterpart Margot Wallström responded by saying Sweden’s decisions wouldn't be “based on Danish politics.”
Just last week, Denmark announced another round of tightened asylum policies meant to keep down the number of refugees in the small Nordic country. Denmark, a country of 5.6 million, believes it will receive 20,000 refugees by the end of the year. By contrast, Sweden, with a population of 9.8 million, recently doubled its refugee forecast for 2015, saying it expects up to 190,000 new arrivals.