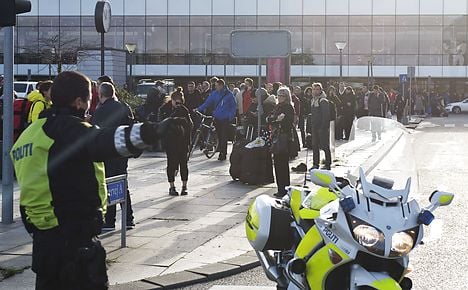 Danish police evacuated one of two terminals at Copenhagen's Kastrup Airport because of a suspicious bag, airport officials and police said. Photo: Jonathan Nackstrand/Scanpix
Danish police arrested two men at Copenhagen Airport on Wednesday after they were overheard discussing a bomb in one of their bags, prompting the evacuation of the terminal, police said.
Police had responded to a “suspicious situation” at the airport at around 12.30pm and opted to completely  evacuate Terminal 3:

After a more than 90-minute evacuation, police announced via Twitter that they had ruled out any danger.

“We are lifting [the alarm] in the airport. There was overheard talk about a bomb. The suitcase was searched. There were no bombs,” police wrote:

Police said that the two men who were heard talking about a bomb were arrested.

“They said that they were only joking with each other,” police spokesman Steen Hansen told AFP.

“Apparently, they are friends, though one was going to Paris and the other was flying to Frankfurt,” he said.

The identity and nationality of the men was not disclosed.
The two arrested individuals were being questioned by police as of Wednesday afternoon.

“Their first explanation is that it was said as a joke, but the police should of course receive a more thorough explanation,” Copenhagen Police spokesman Steen Hansen told Jyllands-Posten.

The bomb scare caused both DSB's trains and the Metro to stop service to the airport and all flight check-in was moved to Terminal 2.

By 3pm, public transport was once again running to the airport and officials expected only minor flight delays.

The incident came just hours after Danish police raised the country's threat level by one notch to the second-highest level, citing the elevated risk of a terrorist attack after last week's Paris attacks.

Earlier this year, a Norwegian teenager was sentenced to 30 days in prison, deportation, and a six-year ban from Denmark after he made a prank bomb threat at Copenhagen Airport for a YouTube video.