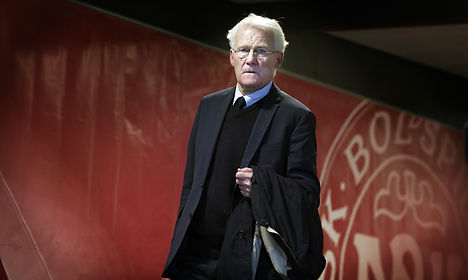 Morten Olsen is done as national coach following Tuesday's draw with Sweden. Photo: Liselotte Sabroe/Scanpix
Morten Olsen quit as coach of Denmark after 15 years in the hotseat following Tuesday's failure to qualify for Euro 2016.
Denmark drew 2-2 at home to a Zlatan Ibrahimovic-inspired Sweden in Copenhagen to crash out of the Euro play-offs 4-3 on aggregate.
“I've told the players that the Federation and I have agreed that it would make no sense for me to continue,” said the 66-year-old Olsen.
“The last few months have been frustrating. I couldn't find consistency either in our performances or our line-up. I take full responsibility.”
Olsen took Denmark to the World Cup last 16 in 2002 and the Euro quarter-finals two years later but this was the second tournament in a row for which Denmark had failed to qualify.
The coach, who won three Belgian titles with Anderlecht as well as the 1983 UEFA Cup as a player, was a stylish sweeper in a talented and exciting Danish side that reached the 1984 Euro semi-finals and the second round of the 1986 World Cup.
He went on to win 102 international caps before retiring in 1988.
The Danish Football Federation (DBU) wrote on its website that it plans to present a new national coach by the end of the year. Norwegian Åge Hareide, a former Brøndby coach who now heads Malmö FF, is reportedly the lead contender for the position.