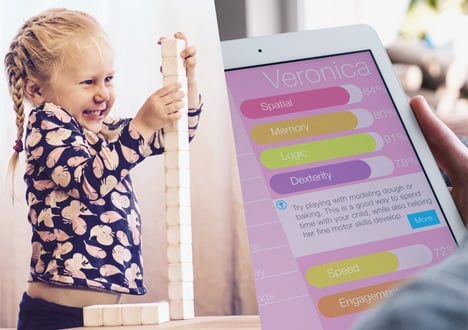 playDXTR's sensors track children's development while they play. Photo: DXTR Tactile
As technology’s presence in our lives increases, so too do parental concerns about raising children in a hyper-connected world. Children today are growing up with smart devices in their hands and studies have concluded that an over-abundance of screen time can be a potential threat to healthy development.
But apart from raising one’s child as a Luddite, what is a parent to do? A young Danish start-up thinks it has found the answer in its intelligent magnetic building blocks that redefine play for the digital age.
The tech company DXTR Tactile is developing a new smart toy to bridge the gap between the virtual and the physical world and unlock the potential of play. The toy, playDXTR, consists of 27 magnetic blocks outfitted with lights and sensors that apply the benefits of modern technology and big data to classic child play.
As a child plays with the blocks, known as Kubits, their embedded technology captures motion and movement, allowing playDXTR’s connected app to collect information across different matrices, such as critical thinking, problem solving, memory, motor skills, and attention span.
The child, not the technology, is in the lead and unlike when a child plays with a smartphone or tablet, the interaction with playDXTR is both physical and active. Learning through play
While the kids play with the toy, its sensors are constantly collecting data in an app that gives children fun and challenging assignments while providing parents with the ability to track their child’s progress and identify areas that need additional stimulation.
“We have only just begun to scratch the surface of what we can learn from child’s play. Play is nature’s way of teaching, so how a child plays can reveal a lot about how the child learns and develops,” Ken Madsen, the CEO of DXTR Tactile, said.
“Parents get a clear picture of their children’s competence and are given intelligent suggestions for games and challenges to strengthen each individual child’s different talents,” Madsen added.
Madsen and his three partners originally developed their technology with the idea of applying it to Parkinson’s patients but with the road to market for medical devices incredibly long, the team decided it would make more business sense to develop playDXTR as a toy. It quickly became apparent that it was a wise move.
“We have kids ourselves so it was really easy to try our prototypes out on them. They were really drawn to the blocks and started playing with them in all sorts of ways,” Madsen said.
Educational experts see major potential in playDXTR.
“Technology will have a positive impact on learning and early child development in previously unimaginable ways over the next many years. Never before have we been able to capture this type of clear and detailed data about every single child,” Nina Rung Hoch, a long-term educational advisor and edtech expert, said.
“Our children deserve to learn through play and playDXTR is a game changer and a positive step in that direction,” she added.
Once the company began to focus exclusively on the toy idea, its building block models and Danish origins quickly earned it comparisons to toy giant Lego. But DXTR Tactile isn’t content with simply creating Lego 2.0, the company feels that is technology’s potential can ultimately be applied to more than just their toy and the medical applications remain a long-term goal.
Beta models available now
PlayDXTR was declared Denmark’s most creative entrepreneurial idea when it won the national Creative Business Cup over the summer, and now DXTR Tactile is now ready to take on the world.
The company recently secured the needed external funding to finish the development of playDXTR and, in Madsen’s words, “disrupt the toy industry”, which he says has stagnated and failed to realize how different the world will look in just a few short years.
The company is now accepting orders for Beta models of the playDXTR toy allowing early adapters to help shape the product ahead of its full launch in November 2016.
“We feel like we are sitting on something that can really help parents strike the right balance between offline and online play while embracing their child’s natural learning potential,” Madsen said.
“PlayDXTR fosters learning while helping parents identify potential trouble areas. Experts have stressed the need to treat development issues as early as possible in order to minimize potential consequences later in life. However, for the untrained eye, these delays are not easily identified. DXTR believes that the solution lies in learning from simple child's play,” he added.
More about playDXTR can be found here.
This article was produced by The Local in partnership with DXTR Tactile