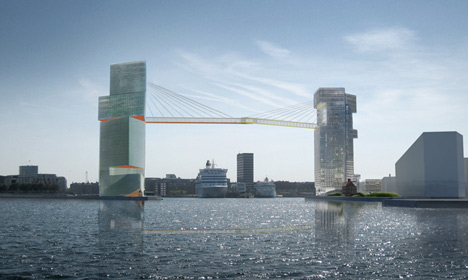 The cycling bridge will change the view of Nordhavn. Photo: Steven Holl Architects
The world's best cycling city is at it again. Copenhagen recently moved an important step closer to set another milestone in cycling infrastructure with the city's approval of a 65-metre high covered track connecting two towers above the Nordhavn harbour waters.
The American firm Steven Holl Architects announced that the city has given approval for construction to begin on Marmormolen (Marble Pier), a project first approved in 2008 but put on ice due to the financial crisis.
The project consists of two towers that will be connected by a suspended bridge enabling cyclists and pedestrians to get both to either side of the harbour while allowing massive cruise ships to continue to dock. Photo: Steven Holl Architects
The cyclists and pedestrians will get an amazing overview of the city while saving a considerable amount of time. Currently, getting from one side of the harbour to the other results in a 2.2 km detour.
The cycling track and walkway, dubbed Copenhagen Gate, will be the most remarkable part of the project. The shocking height of the bridge, 65 metres, is intended to not to interfere with cruise ships at one of the world's busiest cruise ports.
The design concept is “two towers carrying two bridges at two orientations” according to the Steven Holl. “Due to the geometry, the two parts of the bridge will meet at an angle, joining like a handshake over the harbour,” the firm wrote in a press release.

Photo: Steven Holl Architects
Although the Steven Holl project won the city's design competition in 2008, the overall economic situation delayed the project. Now, the massive construction is expected to start no later than 2017, according to the company.
Just how functional the bridge will be remains to be seen. Cyclists will apparently have to use the tower elevators to get to the walkway, cross it, and then use the other tower elevator to go down, which doesn't look very practical at first sight. Photo: Steven Holl Architects
Part of the reasoning behind the bridge is a city requirement that newly-constructed homes need to be within 500 metres of a public transport stop. By giving cyclists and pedestrians the option of crossing over the harbour rather than going all the way around it, both towers will meet the transport requirement.
Influential urban consulting firm Copenhagenize called the plans “a bit wild” but ultimately stated that the Marble Pier “will be an important connection as the city continues to grow”.
“Maybe it lacks thorough practicality – taking a large, bicycle-friendly elevator up to the clouds to cross a harbour head is not exactly a smooth, efficient transport flow. But the function as a link across the water is clear,” the firm wrote.
Practical or not, the astonishing design of the new bridge could become a new cycling attraction like Cykeslangen, the bridge that links Vesterbro and Islands Brygge, or Olafur Eliasson's newly-opened Circle Bridge.