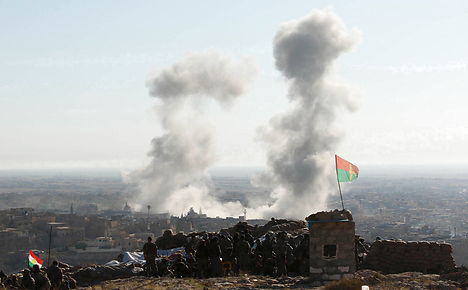 US-led air strikes hit the town of Sinjar, Iraq on Friday and Kurdish peshmerga forces secured several strategic facilities. Photo: Ari Jalal/Scanpix
Søren Espersen, a senior Danish People’s Party spokesman and the head of parliament's Foreign Policy Committee, said on Sunday that the US-led military campaign against Isis, which Denmark is participating in, should bomb civilian targets.
For the latest on the Paris attacks, visit The Local France
Speaking two days after Isis claimed credit for the Paris attacks that killed at least 129 people, Espersen said that the West is carrying out its campaign like “gentlemen” but needs to get more aggressive if it is ever to win the fight against Isis, which is alternately known as the Islamic State or IS.
“We aren’t bombing spots where there are civilians, but we need to start doing so. IS hides behind women and children in villages and towns and they know that we are gentlemen won’t bomb them. That needs to end,” he told TV2.
When asked if that meant he thought the West should bomb women and children, Espersen said “yes, of course”.
“We need to when that’s where the IS fighters are. Those women are also to a large extent part of the system. We can no longer have a situation in which IS operates completely freely knowing full well that they won’t be bombed,” he said.
“We need to develop the war into a real war, otherwise we will lose,” Espersen added.
Jakob Ellemann-Jensen, a spokesman for the ruling Venstre party, said that it would not support striking civilian targets.
“We won’t bomb women and children. We aren’t barbarians,” he told TV2.
Sigurd Hartkorn Plaetner, an author and freelance writer, filed an official complaint with the Copenhagen Police over Espersen’s statements, accusing him of inciting terror.
Denmark joined the international coalition fighting Isis in October 2014. Danish F-16s have flown 547 missions over northern Iraq and have dropped a total of 503 bombs. The F-16s were recently brought back to Denmark for repairs but Foreign Minister Kristian Jensen has promised that they will return to action in early 2016. Jensen has also expressed an openness for extending the Danish mission to include striking targets in Syria.