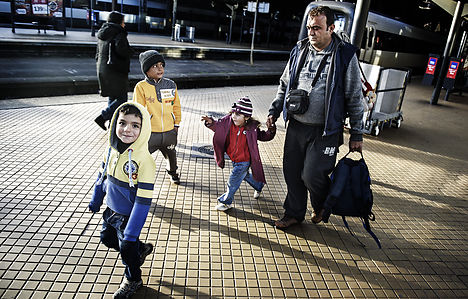 Refugee Abdelrazak Dergham with his daughter and two sons at Copenhagen Central Station after being stopped in Sweden. The family wants to go to Norway. Photo: Simon Læssøe/Scanpix
Around 50 refugees and migrants have headed back to Denmark since Sweden began checking cars, trains and ferries in the southern part of the country as part of its decision to introduce temporary border controls.
“There have been around 50 people since 12pm yesterday [Thursday, ed.] who did not wish to seek asylum in Sweden. They were therefore sent back to Denmark,” Skåne Police spokesman Lars Förstell told Berlingske.
Part of that number was made up of a group of at least 20 Iraqis who voluntarily agreed to go back to Denmark after by arriving in Sweden by train to Malmö or by ferry to Helsingborg.
“Somewhere between 20 and 30 people have chosen to voluntarily go back to Denmark when it was made clear to them it was not possible to transit through Sweden,” Patrik Engström, head of the police's border unit, told Sweden’s TT newswire.
On Friday morning, seven police officers were checking all cars crossing the Øresund Bridge from Denmark, around 20 vehicles per minute just before rush-hour.
“We're checking all vehicles and are asking everyone for identification,” Håkan Jonsson, police group head at the scene, told TT.
Commuters and tourists entering Sweden from Denmark are being told to bring their passports or, if a EU citizen, a national identity card. Nordic citizens are still allowed to cross the border without a passport, under a passport-free zone agreement separate to Schengen, but must be able to identify themselves as such.
The estimated 30,000 commuters who cross the Øresund Bridge between Copenhagen and Malmö by car and train every day are likely to face some delays although eye witnesses have reported that the ID checks were being carried out in a relatively calm and swift manner, taking no more than a few minutes.
Danish PM Lars Løkke Rasmussen has said that Denmark has no plans to follow suit and institute its own border controls, arguing that a decision to do so would likely result in more, not fewer, asylum seekers.
Rasmussen said that Sweden may also see an increase in asylum seekers thanks to its new border controls.
“It can mean that some of those who had an ambition of travelling on to Finland or Norway will now instead give their asylum applications to Sweden,” he told TV2 News after Sweden announced its decision on Wednesday evening.
Swedish police said between 500 and 600 refugees wished to seek asylum in the country on Thursday and were taken to the Migration Agency.
Sweden’s decision to reinstate border checks is temporary and valid for 10 days, but can be renewed for up to six months under Schengen regulations on free movement.
Sweden, a country of 9.8 million people, has taken more refugees as a proportion of its population than any other country in Europe as the continent struggles with its biggest migration crisis since the Second World War.
The country expects to receive up to 190,000 asylum seekers this year and in the first week of November alone received 10,201 asylum applications – more than Denmark received through the first nine months of 2015.