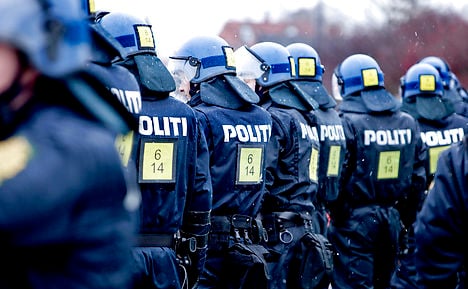 Copenhagen Police will test their terror readiness on Wednesday. Photo: Bax Lindhardt/Scanpix
If you find yourself in Copenhagen on Wednesday and see large numbers of armed police or even hear gun shots, don’t worry. It’s all part of the plan.
Copenhagen Police have announced that officers will be engaged in a full-scale operation to train its tactical and operational response to terror.
“The exercise will take place somewhere in Copenhagen where one might hear gun shots in some areas. But you shouldn’t be worried. It is just an exercise and only blanks will be fired,” police wrote on Facebook.
Police did not give exact details about the nature of the excercise but said that the Copenhagen Fire Brigade, rail operator DSB and civilians would also be a part of it. In addition to hearing gunshots, residents might also notice helicopter action and some slight traffic disturbances.
Copenhagen Police said that the purpose of the training is to test new technologies, information sharing and a new ‘surveillance concept’.

'Nuclear catastrophe' at sea
At the same time that police will be testing their terror response in the capital, a large operation will respond to a “planned catastrophe” in the Kattegat between Denmark and Sweden.
According to a press release from the East Jutland Police, “a collision between an nuclear-powered ship and a large cargo vessel will be the sounding gun for a chain of events that will create problems for all of society”.
More than 500 participants from 30 different public authorities and organizations will take part in the crisis training exercise, dubbed KRISØV, making it the largest of its kind in Denmark.
Only the Danish National Police (Rigspolitiet) and the Danish Emergency Management Agency (Beredskabsstyrelsen) know the full details of the planned ‘catastrophe’, which will take place on Wednesday and Thursday.
Helle Kyndesen, the head of the East Jutland Police, said the exercise will provide excellent opportunities for testing police and public response.
“We look forward to participating because it is important that our crisis management functions effectively and that each and every one of us are confident with our responsibilities, assignments and roles,” Kyndesen said.
Previous exercises have focused on cyber attacks, the outbreak of bird flu and terror.