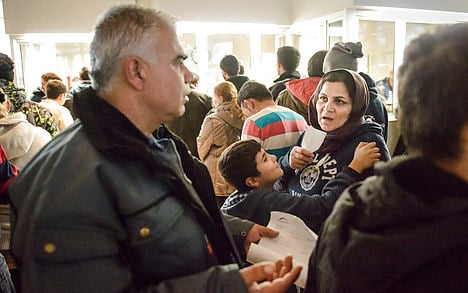 A crowded Swedish Migration Agency office in Malmö. Photo: Simon Skipper/Scanpix
Denmark, Norway and Finland – but also Sweden, until now especially welcoming to migrants – have begun cutting back the benefits they offer to newcomers while also hardening their asylum policies.
“It seems there's a certain amount of competition aimed at not offering the most generous social benefits to asylum seekers,” said Asle Toje, a Norwegian international relations expert.
Denmark's immigration policy has grown tighter since 2001, when the far-right Danish People's Party (DF) began influencing policy-making.
In July, soon after elections made DF the country's second-largest party, Denmark moved to slash benefits to asylum seekers in a bid to reduce the influx.  Under the new rules, which came into effect in September, a recently arrived immigrant without children now receives 5,945 kroner (€797, $897) per month, compared with the 10,849 kroner they got previously.
The move seems to have had the desired effect, since the number of asylum seekers declined in September from a year earlier while setting records elsewhere in Europe.
Syrians, Afghans and Eritreans are still arriving en masse in Denmark, but they generally move on to destinations considered more hospitable.
“Many of them say that the conditions are better for them in other countries, perhaps Sweden, and so they go there,” said DF leader Kristian Thulesen Dahl.
DF, an indispensable ally of Denmark's minority Venstre government, is doing all it can to make the country less attractive to refugees.
'Generous welfare states'
Norway and Finland, both led by governments with anti-immigration elements, are similarly moving to cut back social services and toughen conditions for uniting families and granting citizenship or permanent residency.
“It's clear that the Nordic countries have generous welfare states, but we must ask ourselves if we should share them with those who come in,” said Norway's justice secretary of state, Joran Kallmyr, of the right-wing populist Progress Party.
Norway, an island of prosperity thanks to its hydrocarbons, is becoming unsure of preserving its comfortable lifestyle as oil prices decrease.
Even ultra-liberal Sweden, despite taking in more asylum seekers per capita than any other EU state – the country is expecting around 190,000 this year for a population of under 10 million – has decided to tone down its image of generosity.
See also: Denmark and Sweden in refugee war of words
In line with the rise of the far-right Sweden Democrats party, the kingdom is now demanding that its European partners share more of the burden, and it plans to harden conditions for reuniting families.
Sweden's “Social Democrats are worried about losing voters to the anti-immigration Sweden Democrats, who were capitalizing on people's fears over mass migration to Sweden,” said Magnus Hagevi, political scientist at Linnea University.
“Already we've witnessed a rash of arson attacks on migrant facilities across Sweden – people are also worried about the price of immigration. Many people are worried about what the future will bring and how that will affect the welfare state,” he said.
Again on Saturday, a planned refugee shelter was burned down in Sweden, the latest in a string of suspected arson cases targeting a huge influx of migrants.
Using social media
The Nordic countries are also trying to use the media to help them stop the flow at its source.
In September, Denmark took out advertisements in the Lebanese press warning about new asylum regulations in the hope of discouraging Syrian refugees.
Norway and Finland have tried to get the message across on Facebook, where the bulk of migrants turn to compare possible destinations.
See also: Norway launches anti-refugee Facebook page
“Human traffickers spread rumours on social networks to sell trips by making people believe they should leave for Europe now because the borders are open,” Kallmyr said. “We should correct these rumours… and spell out what awaits them – less aid, difficulty reuniting families and lots of rejected requests.”
Toje had a more nuanced view.
“Refugees are not coming here mainly to take advantage of the welfare state,” he said. “They are fleeing countries where there is war, conflict and hardship. So even if we reduce services, I don't think that will necessarily lessen the number of asylum seekers.”