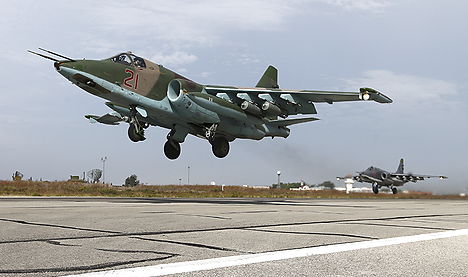 The report says that a direct military confrontation between the West and Russia is "unlikely". Photo: Scanpix
The Danish Defence Intelligence Service (Forsvarets Efterretningstjeneste – DDIS) released its national risk assessment report on Wednesday evening, saying that Denmark faces “serious and ever more complicated” threats.
“The terror threat from militant Islamist groups like ISIL [an alternative name for the Islamic State or Isis, ed.], the situation in Russia and the threat of cyber espionage make up the most significant security policy challenges for Denmark,” DDIS head Thomas Ahrenkiel said.
“Additionally, DDIS is focused on the conflicts in the Middle East, northern Africa and Afghanistan, as well as the developments in the Arctic, which have particular importance for Denmark’s security,” he added.
The assessment report said that Denmark and all other Western countries face a “serious terror threat” on several fronts. Like the recent report from the Danish Security and Intelligence Service (PET), DDIS pointed to returning jihadists as one of the biggest challenges.
See also: Danish jihadists pose 'significant' threat
“The group of returned militant Islamists will likely grow over the coming years,” the report states. It adds however, that the ability of terror groups like Isis or al-Qaeda to carry out major attacks in the West is “limited”.
DDIS also warns that Russia’s attempts to “reestablish itself as a superpower” threaten Danish interests and that “Russia has shown the ability and will to use military means to achieve its strategic goals”.
“It is unlikely that Russia has the intention of instigating a military confrontation with Nato or Denmark, but over the coming years Russia will continue to be a significant security and political challenge for the West, Nato and Denmark,” the report states.
Denmark has experienced increased tensions with Russia over the past year, with the Russians behind not one but two separate simulated attacks on the Danish island of Bornholm and several incidents of Russian activity in and around Danish air space.
Russia’s ambassador to Denmark has even warned the Danes that they have made themselves a target of a potential nuclear attack by joining Nato’s missile defence system.
See also: Russia delivers nuclear threat to Denmark
Russia and Denmark have also laid conflicting claims over the North Pole and DDIS said that a “more challenging direction in Russia’s Arctic policies is beginning to take form” that is likely to run in parallel to the more cooperative tone Russia has struck with Denmark and others in the Arctic.
“Russia has in recent years begun a military expansion in the Arctic that has the goal of controlling the Northeast Passage and protecting Russia’s northern areas against military threats. This military expansion and behaviour is militarily defensive, but at the same time politically offensive,” DDIS said.
The terror threat also singled out espionage against public authorities and private business as “the most serious cyber threat to Denmark and Danish interests”.
See also: Denmark prepares to wage cyber warfare
“The espionage is primarily carried out by state and state-supported groups. In recent years, the extent of cyber-espionage against Denmark has grown significantly and the groups’s methods and techniques have become more advanced,” the report states, concluding that the cyber threat against Danish institutions and business is “very high”.
The full DDIS report can be read here (in Danish).