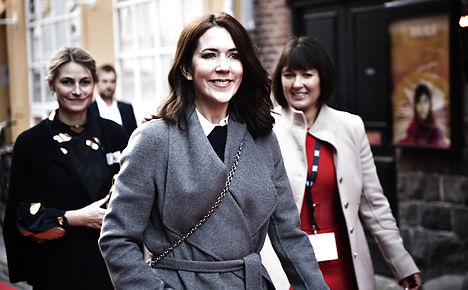 The royals said the Daily Mail's story about Princess Mary is based upon a false Facebook profile. Photo: Mathias Løvgreen Bojesen/Scanpix

The Danish Royal House has blasted a Daily Mail article about Princess Mary as untrue and based on a serious case of identity theft.

The Daily Mail, the largest English-language news site with more than 11 million readers, published a critical article on Monday that alleged that the relationship between Princess Mary and her Australian family is strained to the point of becoming a “bitter family feud”.

The Mail's story was derived from a Facebook comment posted on August 6th, 2014. According to the Daily Mail, when Mary's brother John Stuart Donaldson posted about a family trip to Rome, the princess's father, John Dalgeish Donaldson, referred to his royal daughter as “she who shall not be named” and asked if she refused to join the trip or if her brother “did not extend her the offer”.

Mary's brother allegedly replied: “Did not bother to ask, Dad. Trish isn’t speaking to her right now”. The Mail interpreted that as an indication that there had been a falling out between Princess Mary and her sister Patricia Bailey.

On Thursday, the Danish Royal House came out with a strong refutation of the story and levelled some serious criticism at the Daily Mail's story.

“We believe that this is a case of obvious abuse. It is all too easy to make false profile pages, and in this case it is [Mary's] brother's identity that has been misused,” Royal House press officer Lene Balleby told Danish tabloid BT.

The royals were not the only ones who seemed to take a degree of disgust at the article. Daily Mail readers responded to the story with comments such as “Everyone should mind their own goddamned business”, “I don't think it's any of your business Daily Mail”. One of the most popular comments on the article was: “She'll make a great Queen of Denmark. Let. Her. Be.”

This is now the second time this month that the Royal House has reacted strongly to a published story relating to the private lives of the royals. Two weeks ago, the press office fiercely denied any truth behind a story published in Her & Nu’s story about Princess Marie’s alleged breast enhancement surgery in Lithuania.

Her & Nu stuck by its source but said it couldn't prove it without revealing its source so decided to publish a retraction and public apology. The Royal House then sent out a press release denying all accusations in a move that one long-term royal watcher called “sensational”.

Following the reaction to the Daily Mail story, Lars Hovbakke Sørsensen, a history professor who is an expert on the Danish royal family, told BT that the royals appear to have adopted a new style to combat stories that they feel have crossed the line into too-personal territory.

“There have always been a ton of rumours circulating about the royals, there is a long tradition for that, but the new thing is that false stories can spread much quicker to a much larger audience than before with the help of Facebook,” he said.