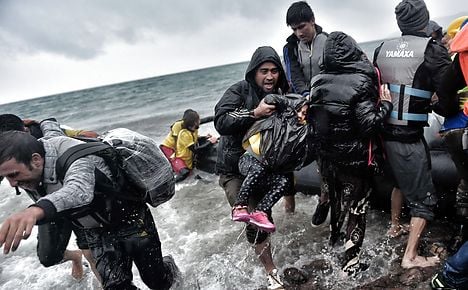 Refugees and migrants arrive on Lesbos on Friday after crossing the Aegean sea from Turkey. Photo: Aris Messinis/Scanpix
“The demand is simply too low, which is why we have decided to take a break during the summer of 2016,” company spokesman Stig Elling said in a statement.
Lesbos is a “small, authentic island, but this summer has painted a very different picture. Every day thousands of refugees arrive on the island,” the group said.
Bravo Tours had received no complaints from customers over the situation in Lesbos, which is a gateway into Europe for thousands of migrants and refugees.
“I hope for everyone's (sake) that the unfortunate situation will soon be over, and then we will naturally want to return,” chief executive Peder Hornshøj said.
“Lesbos has a very special authenticity that gives a really good holiday experience,” he added.
Bravo Tours controls around 14 percent of the Danish charter travel market, putting it in third place behind Spies Travel and Star Tour.
Until now it has flown twice a week to Lesbos. Spies still flies there, but Star Tour stopped a year ago, according to the Bravo spokesman. The smaller ArhusCharter also goes there.
Another Danish travel agency, Thomas Cook-owned Spies Rejser, said in September that Danish tourists had brought 15 tonnes of aid to Lesbos and Kos, another Greek island to the south, after taking up an offer to check in up to 20 kilos (44 pounds) of donations per person for free.
The International Organization for Migration (IOM) says more than 600,000 migrants have landed on Europe's shores since January, while more than 3,000 have died or gone missing in the attempt.
More than 450,000 people have arrived in Greece, most of them fleeing brutal conflicts in Syria, Iraq and Afghanistan.
Authorities in Lesbos have been struggling to clear the island's beaches, a major tourist attraction, of thousands of life vests and boats left behind by migrants crossing the Aegean Sea.