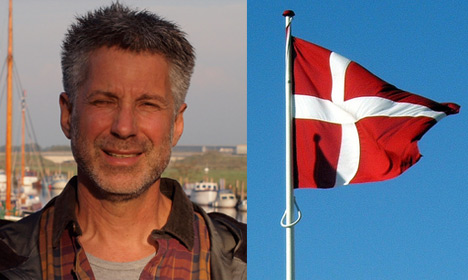 Edward Lippe described the process of applying for citizenship as "disappearing into a black hole". Photos: Submitted, Jens Rost/Flickr

A group of “well-integrated and frustrated foreigners” is staging a protest on Thursday to voice their displeasure with Denmark's citizenship process.

In a press release, the group decried the long processing times and confusing information from the authorities that make applying for Danish citizenship an “unfair obstacle course”.

“We have a heartfelt need to make politicians and the public aware of the, mildly said, poor conditions we experience in the very long, frustrating and unreasonable process before we – possibly – finally can see our names on a Danish law giving us Danish citizenship,” organizers wrote.

Citizenship processing times at the outset of 2015 were at ten to 12 months and now that the government has approved new citizenship rules that will be applied retroactively to all applications filed after August 14th, 2014, the waiting time is expected to extend to as much as 18 months.
See also: Denmark approves tougher citizenship rules
Edward Lippe, one of the organizers of Thursday's demonstration, told The Local that he applied for citizenship in August 2014 – just days before the retroactive cut-off date – and has been stuck in an “absurd” bureaucratic nightmare ever since.
“The processing time is just absolutely horrendous. It takes forever and you have no idea of where you are in the process. It’s like disappearing into a black hole,” Lippe said.
The US citizen has lived in Denmark for 34 years and meets all of the citizenship requirements, “both the old ones and the new ones”, but was told that his name will not be included in the next biannual citizenship bill, which parliament is scheduled to take up on Thursday.
“I feel like I’m running a marathon and I've ran 40 kilometres and just as soon as I can see the finish line, someone has moved it another 20 kilometres uphill,” he told The Local.
See also: 'Significantly harder to get Danish citizenship'
Lippe said that another major complaint of would-be Danes is the lack of clear information and communication from immigration officials.
“There is no information whatsoever about what the authorities are doing or where they are in the process. What rules are going to be applied now, and to whom, and what is that going to mean to those who have already applied or are currently thinking about applying? There are no answers to be found,” he said.
He added that regardless of what one thinks about the immigration policies of Integration Minister Inger Støjberg, citizenship applicants should be given better treatment and clearer information.
“Inger Støjberg has to answer the question about what she is going to do to improve processing and communication. She has an obligation to give proper information and effective service,” he said.
Støjberg's office declined The Local's request to comment.
Lippe and co-organizer Kirsten Kock expect anywhere from 50 to 500 people to join the demonstration, which will take place on Thursday, October 29th at 9am at Christianborg Slotsplads in Copenhagen. More details can be found here.