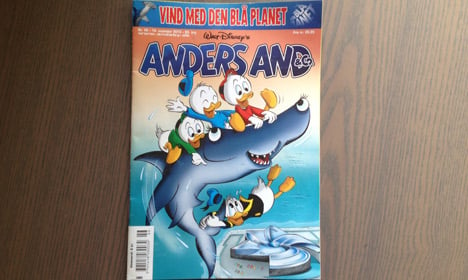 The issue in question. Photo: The Local
A two-year-old edition of the Danish version of Donald Duck, Anders And & Co., has caught the sceptical eye of Denmark’s Consumer Ombudsman (Forbrugerombudsmanden).
The November 2013 edition in question features Donald Duck and his nephews Huey, Dewey and Louie (Rip, Rap and Rup in Danish) clinging to a hammerhead shark flying high above the popular aquarium Den Blå Planet, which at that point had recently opened to the public. Above the cover photo were the words “win with Den Blå Planet” and the aquarium’s logo.
The Consumer Ombudsman said in a press release on Tuesday that the aquarium and publisher Egmont had violated the Danish Marketing Practices Act's (markedsføringsloven) rules for hidden advertising messages because nowhere on the cover did it state that the comic was an ad for Den Blå Planet.
The two parties do not disagree, saying openly that the edition of Donald Duck was indeed an advertisement for the aquarium and that that should have been obvious to readers.
The ombudsman however contends that the cover of this particular edition looked similar to other issues, with imagery referring to a story within the comic – in this case, Donald’s visit to ‘Andeby Akvarium’, or “Duckburg Aquarium”. “This is in my estimation a violation of the ban against hidden advertising. Den Blå Planet and Egmont have mixed paid and editorial content together to such a degree that it is impossible for children to see that it is an advertisement. Therefore, we are reporting them to the police,” Ombudsman Christina Toftegaard Nielsen.
A spokesperson from the ombudsman’s office told The Local that the case will now be turned over to the police, who will determine if Egmont Publishing Kids and the then-editor of Anders And & Co. should be fined and, if so, for how much.
Nielsen said that the case is particularly significant since it deals with a popular comic strip aimed at kids.
“There are particularly rigorous requirements for how clearly advertising should be labelled when the target group is children and young people. Since Donald Duck is a media that primarily targets children, the case is serious,” she said.