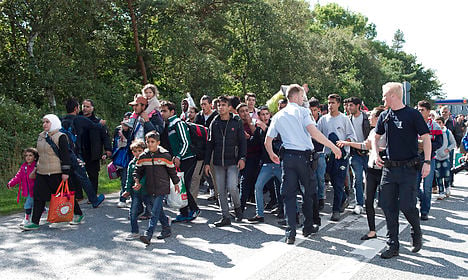 The Danish Immigration Service's plan distributes the 12,000 refugees expected in 2016. Photo: Jens Nørgaard Larsen/Scanpix
A refugee distribution plan for 2016 was put forth by the Danish Immigration Service (Udlændingestyrelsen – DIS) on Thursday. While Aalborg Municipality will receive 642 refugees and Aarhus Municipality will welcome 587, the much larger Copenhagen will not take any.
Copenhagen politicians on Thursday also voted down a proposal to voluntarily take in 200 refugees. One of the council members who voted against the proposal said that it's time for other parts of the country to do their part.
“We have integration problems in Copenhagen so I'd rather pass the buck to those who don't take enough,” Lars Aslan Rasmussen of the Social Democrats told Ritzau.
The mayor of Vesthimmerlands Municipality in northern Jutland, which will receive 109 refugees under the DIS plan, told Berlingske that it was unfair that the nation’s largest city is not taking part.
“I think it is simply ridiculous that Copenhagen couldn’t manage to vote in favour of taking 200 refugees. I think that they could find the space to establish a refugee centre that could house 2,000 refugees because the City of Copenhagen could manage that,” Knud Kristensen said.
Under DIS’s plan, it becomes the individual municipality’s responsibility to house the refugees and carry out integration programmes.
Speaking to BT, Kristensen said that his municipality simply cannot afford to take in the 109 additional refugees.
“It is hard enough to find housing for them and the empty buildings we have are out in the countryside. We would have to create extra bus connections so that they can receive an education or get to work,” he said.
“We have just decided to close down an eldercare centre and are considering closing three smaller schools. If we also have to find money for this project [the refugees, ed.] we will have to take another round [of spending cuts, ed.]. It will have to be other schools, other care homes and cutbacks in daycare institutions,” he added.
Copenhagen’s deputy mayor for integration, Anna Mee Allerslev, said that the city’s unwillingness to take refugees was “embarrassing”.
“Copenhagen is taking zero refugees. There is not much solidarity or glory in that,” she wrote on Twitter.
The full municipal distribution plan can be seen here.