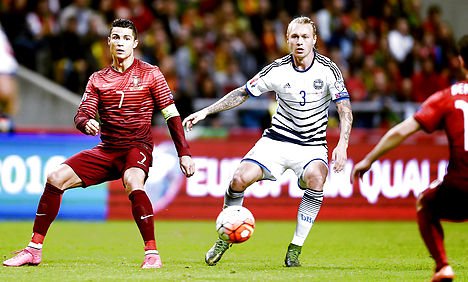 Simon Kjær and the rest of the Danish squad can still advance despite their loss to Ronaldo and Portugal. Photo: Liselotte Sabroe/Scanpix
Despite the Danish national squad’s 0-1 loss in Braga on Thursday, hopes for next summer’s European championships in France are still alive thanks to Serbia.
Serbia topped Albania 2-0, leaving Denmark in second place in Group I action. The Danes could still back their way in to Euro 2016 if Armenia can either beat or tie Albania. That scenario would automatically qualify Denmark for the tournament, while an Albanian victory would leave Denmark in third place in group action and facing a playoff to move forward.
National coach Morten Olsen said after Thursday’s loss that he still thinks the Danes will make it in.
“Congratulations to Portugal. I hope we can follow them into the Euro finals,” the coach said after the match.
Denmark put itself in this situation by playing to two goalless draws against Albania and Armenia ahead of the Portugal match.
The Armenia and Albania face-off that will affect Denmark’s fate is Sunday at 6pm in Yerevan.