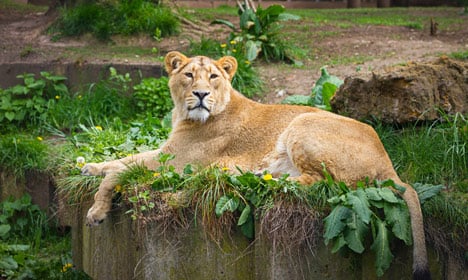 Not the actual lion to be dissected. Photo: Anna Moskvina/Scanpix
When the Copenhagen Zoo performed a public autopsy on a giraffe in front of curious school children in 2014, the zoo thought it was a good way to teach the kids about the wonders of nature.
But the killing, dissection and subsequent feeding to the lions of the giraffe Marius set off an international media storm and a string of proposed boycotts and even death threats against the zoo and its employees.
Now the Odense Zoo has scheduled a similar event for next week’s autumn school break. The zoo is inviting guests to watch a lion be dissected for study. The lion was put down a few months back because the zoo’s lion population had grown too large. It has since been in a freezer.
On the zoo’s website, guests are invited to watch the dissection.
“Be there when one of the zoo’s employees dissects a lion. There will be explanations when the animal is cut up and the heart, lungs and other body parts will be displayed. If there is a wish to closely study body parts, that will be possible and the whole thing will be geared toward dialogue,” the zoo writes.
The dissection is planned for Thursday, October 15th at 12pm. A dissection of rats is also planned at 2pm.
Zoologist Michael Wallberg Sørensen said that the zoo doesn’t anticipate a reaction similar to the one that greeted the Copenhagen Zoo in 2014.
“The reason we are dissecting it is that we believe there is a lot of education involved in dissecting a lion,” Sørensen told AFP.
Speaking to TV2 Fyn, Sørensen said that the public dissection will “show how fantastic a lion is”.
“There are many physical adaptations needed to be the top predator on the savannah. That’s what we will focus on and show our guests,” he said.
“We haven’t previously experienced people getting angry so we don’t anticipate it this time either,” he added.
Indeed, a check of the Odense Zoo website shows that a lion was dissected on January 25th with scant media attention.
The Copenhagen Zoo prompted a storm of criticism in February last year for putting down a healthy giraffe and dissecting it in front of children.
The zoo's scientific director received death threats after Marius, a healthy 18-month-old giraffe, was put down despite numerous offers for him to be rehoused and thousands signing an online petition to save him. After the dissection the animal's meat was fed to lions.
In Denmark, where farming is an important part of the economy, schoolchildren sometimes visit slaughterhouses on tours that include watching pigs on the slaughter line.
Many Danes were surprised and even angered by what has been dubbed 'Marius-gate', and the Copenhagen Zoo's scientific director Bengt Holst was among those decrying the “Disney story” shaping many people's view of zoo creatures.