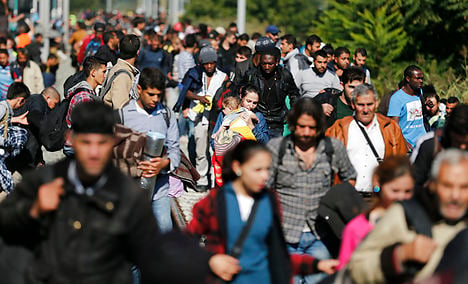 Migrants disembark from a train after arriving in Botovo, Croatia on Wednesday before walking to the Hungarian border. Photo: Antonio Bronic
The EU’s leaders agreed on spending and strategy for the coming months to try and lighten the load on countries most heavily burdened by the refugee crisis.
Danish PM Lars Løkke Rasmussen said the results of Wednesday night’s meeting represented a “growing realism” within the EU that the current refugee situation needs more than just a redistribution of some 120,000 refugees.
“I completely accept the decision on redistributing the 120,000 refugees. But one can quite calmly say that that debate has sucked an unbelievable amount of energy and focus from the actual problem,” Rasmussen told reporters.
“At the meeting today there was a broad consensus that many things need to be done at the same time. And there was also the will to support it,” he added. French President Francois Hollande, Denmark's Prime Minister Lars Lokke Rasmussen and European Council President Donald Tusk attend a European Union leaders extraordinary summit on the migrants crisis, in Brussels on Wednesday. Photo: Yves Herman/Scanpix
The EU agreed to set up registration centres known as “hotspots” in the countries where most refugees arrive on European soil for the first time.
As well as hotspots in Greece and Italy, there are plans for a third in Bulgaria, German Chancellor Merkel said.
European cash will also begin flowing to the front lines of the refugee crisis, with €1 billion (7.5 billion kroner) earmarked for the UN World Food Programme (WFP) and another billion for direct aid in Turkey.
African countries in crisis will also receive €1.8 billion in emergency funds and the EU's border agency Frontex will be beefed up with more cash and personnel.
The total planned spending has been doubled from the amount leaders had planned for at the beginning of 2015, to €9.2 billion.
EU leaders will meet again for a scheduled summit in three weeks' time and continue their discussions.
Rasmussen said that he hoped with Wednesday’s meeting, Europe can get over the divisions between east and west that have arisen over the refugee situation.
“A few days ago the debate in the media was very polarized. Some sent the signal that Europe should just open its doors, while others wanted to hermetically seal it with instruments that in the Danish context appeared inhumane,” the Danish PM said.
Despite the leaders’ agreement on eight key points, Rasmussen said it remains uncertain if the initiatives will stop the flow of refugees and migrants entering Europe.
“I am not convinced that we will have won back control of our borders tomorrow. But I am convinced that we have now taken the first realistic step to do something about the problem,” he said.
Rasmussen has convened a Thursday meeting at Marienborg to discuss ways to better integrate refugees into Danish society.