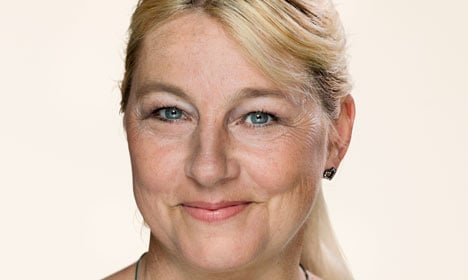 MP Pernille Bedixen. Photo: Steen Brogaard/Folketinget
Pernille Bendixen of the anti-immigration Danish People's Party (DF) was asked how the country's right-wing government would be able to keep its pledge of helping more refugees in areas bordering conflict zones, while at the same time reducing foreign aid.
“We will have to take it from the gross domestic product [GDP], I think,” she told talk radio station Radio24Syv on Monday.
“It has been suggested before that you should cut down on the gross domestic product, or some other technical thing in that context, so that the saving is offset. At least that's what I've heard,” she added.
After a bemused radio host asked her if she actually knew the meaning of GDP, Bendixen said: “Yes, but there is something or other in the gross domestic product that is too high. What that is, I simply cannot remember. Like I'm telling you: It's a technical thing that others are talking about.”

In an interview on Tuesday, she admitted that her comments had been “nonsense” and claimed that what she had really been trying to say was that Denmark should lower its spending on foreign aid to 0.7 percent of GDP rather than the current 0.87 percent.
She also cautioned that requiring politicians to know what GDP was could discourage people from her “educational background” to run for office.
“They see this and think okay, you have to be a walking encyclopedia,” she told Jyllands-Posten.
Bendixen, a childminder, was elected to parliament in June's election, in which DF went from 22 to 37 seats and became the biggest party in the right-wing bloc.
As a one-party government, the ruling Venstre party needs DF's support to pass legislation and has placed controversial adverts in Lebanese newspapers to discourage refugees from seeking asylum in the country.
However, in a sign of possible growing frictions between the two parties, DF spokesman Søren Espersen threatened on Monday to topple the government if it goes along with a planned 'national compromise' on immigration policies.
Police say that between September 6 and 21 at least 12,400 migrants entered the country, but the vast majority have been headed for Sweden and Finland, which are seen as having more generous asylum rules.
Url copied to clipboard!