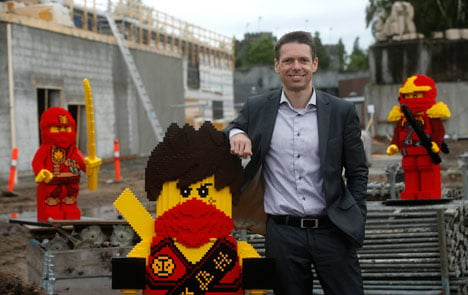 Legoland director Christian Woller said Legoland is "lifting the bar" on amusement park attractions with the new Ninjago ride. Photo: Legoland
Legoland in Billund has announced its largest ever expansion project, a 5,000 square metre addition centred around the popular Ninjago line of toys.
Legoland is investing 85 million kroner into the new Ninjaland area, which will include a ninja training centre, a climbing wall, a lazer labyrinth and Ninjago – The Ride, a 4D experience in which guests will have to contend with the four elements of earth, air, fire and water as they battle bad guys from the Ninjago universe.
“The entire ride is built around the guests’ own movements. Their ninja punches fly through the air while they travel through the overwhelming Ninjago 4D universe that challenges all of their senses,” Legoland director Christian Woller said in a press release.
“We daresay that we are lifting the bar on how much our rides come to life,” he added.
See also: VIDEO: A story of love and Legoland
In addition to the new activities, the massive expansion to the Billund amusement park will also include a recreation of the Ninjago world made out of 727,000 new Lego bricks. Park personnel used 7,000 hours to assemble the new models.
The combined 85 million kroner being spent on the expansion represents the largest ever investment at Legoland, which is Denmark’s third most visited tourist attraction. Woller said Ninjago was the perfect vehicle for the historic upgrade.
“Ninjago is a universe that is known and loved by children around the world. The story is about friendship, good versus evil and above all a whole lot of physical activity that makes it ideal to bring to life in a Legoland park,” he said.
The new Ninjago area will open to the public along with the rest of Legoland Billund in March 2016.