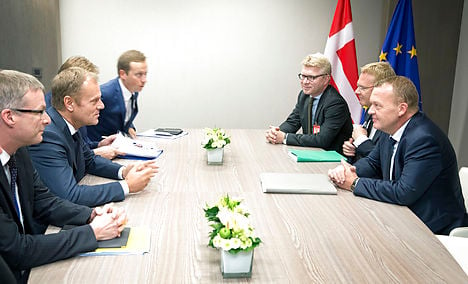 The ex-Polish premier consented to a demand made by German Chancellor Angela Merkel after a meeting of EU interior ministers on Monday failed to reach an agreement on relocating 120,000 around EU member states.
Following that meeting, Danish Integration Minister Inger Støjberg once again stressed that Denmark would have no part in the relocation, but in a surprise move the Danish government changed its position on Thursday by voluntarily offering to accept 1,000 refugees.
See also: Denmark to voluntarily take 1,000 EU refugees
Støjberg and Rasmussen made the announcement just hours before the Danish PM had a private audience with Tusk, in which the European Council president said he “welcome[d] Denmark’s readiness to accept more refugees”.
Although Denmark’s offer represents just a small number of the refugees that are in Europe, a spokeswoman for the EU Commission said it was significant nonetheless.
“Symbolically, it is a very important signal of solidarity. Now our experts must determine if the Danish contribution can count toward the redistribution when [Denmark] has an opt-out [on EU asylum policies, ed.] or if it should be in addition to it. But there is no doubt that it is an important political signal from a country like Denmark,” Mina Andreeva told Politiken.
In Brussels on Thursday, Rasmussen said that he hopes European leaders can settle the particulars of the redistribution so they can move on to focusing on protecting Europe’s borders and offering help to the countries surrounding Syria, which have taken in millions of refugees.
“[The Danish offer of 1,000 refugees] means that we can help contribute to Europe now getting the real discussions under way,” he said.