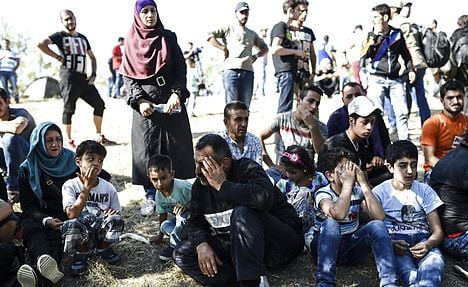 Over a half a million refugees have crossed into Europe so far this year. Photo: Bulent Kilic/Scanpix
Danish Prime Minister Lars Løkke Rasmussen and Integration Minister Inger Støjberg said at a Thursday morning press conference that although Denmark refuses to be a part of an obligatory redistribution of some 160,000 refugees, it will voluntarily accept a small number.
Støjberg announced that Denmark will offer to accept 1,000 refugees if Europe can reach agreement on the resettlement plan championed by European Commission President Jean-Claude Juncker last week.
“In light of the extraordinary situation, we have informed parliament’s parties that the government will offer to take a limited amount of asylum seekers. It is an amount of 1,000 people. I will take that message to my colleagues when we meet again for negotiations on Tuesday,” the integration minister said. Integration Minister Inger Støjberg and PM Lars Løkke Rasmussen at Thursday's press conference. Photo: Niels Ahlmann Olesen/Scanpix
The government said it has yet to decide the period of time over which the refugees will be accepted and Støjberg added that the offer is contingent on a European agreement to the resettlement plan and the support of the Danish parliament.
The anti-immigrant Danish People's Party (DF), on which the Venstre government normally depends to pass legislation, said it would not back the move. Even without DF, the government has enough backing among other parties to get the move passed in parliament.
At the Thursday press conference, the Danish leaders made it clear that they would not have their asylum policies dictated by Brussels.
“Denmark will not participate in an obligatory quota system on the distribution of refugees,” the PM said.
Denmark has an opt-out from Europe's immigration policy and Rasmussen stressed that there is no support within parliament for going along with the EU quota plan.
“A good solution should bring the influx under control so that there is more room for integrating the refugees who come here,” he said.
In addition to offering to accept 1,000 additional refugees, Rasmussen also announced that Denmark will contribute 100 million euro (750 million kroner) to joint European solutions to the current refugee crisis. The PM said that 250 million kroner would go to immediate humanitarian aid in the areas bordering conflict zones, while the remaining 500 million would be earmarked for joint European initiatives including the EU's Frontex border agency.
The PM also announced that the government will introduce programmes aimed at strengthening the integration of those refugees and asylum seekers already in Denmark.
“Regardless of what one might think about the government’s immigration policies, there are refugees in Denmark and more refugees are coming. We as a society have a responsibility for them […] and a responsibility to ensure that we do not make the same historical mistakes as before,” Rasmussen said.
The PM, who just months ago campaigned on ensuring “an immediate halt” to “the massive influx” of asylum seekers in Denmark, denied that he has shifted course.
“It is my responsibility to use the tragic situation to find a solution that is in Denmark's interest. That requires that Europe comes up with a shared solution,” he said.
Rasmussen met with European Council President Donald Tusk later on Thursday and Tusk tweeted that he welcomed the Danish PM's proposal: