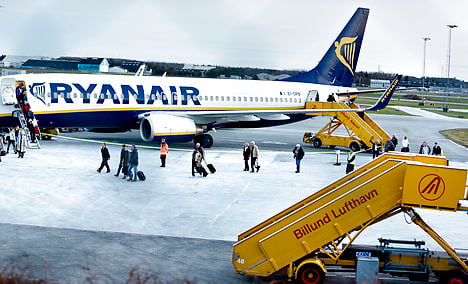 Ryanair is reportedly preparing to expand its Billund operations. Photo: Martin Dam Kristensen/Scanpix
When Ryanair closed its base at Billund Airport in July in the midst of a high-profile conflict with labour unions, the Irish airline said that traffic at the Jutland airport would be cut in half and at least four of its routes would disappear.

See also: Danish Ryanair row inspires unions abroad
But according to a report from the air industry website checkin.dk, the base closure is likely to have less of an impact than anticipated. To the contrary, Ryanair is reportedly eyeing the addition of nine new routes from Billund.
The new routes will fly to Alicante, Barcelona, Málaga, Palma de Mallorca, Malta, Budapest, Milan, Pisa and Rome. With the new destinations, Ryanair would make 41 weekly flights from Billund Airport.
A Ryanair spokesman confirmed the new destinations to check-in.dk but stressed that the airline’s schedule for summer 2016 had not yet been finalized.
An airport spokesman also confirmed that Billund is in talks with Ryanair.
“We have a dialogue with Ryanair but we don’t know yet exactly what they will end up flying. They have put some things into our booking system that aren’t on sale yet,” Jesper Klausholm said.
Earlier this month, Ryanair announced that despite the closure of its Copenhagen Airport base, it would also be stepping up its activity out of the Danish capital. Ryanair added 15 Copenhagen routes to its summer schedule and company CEO Michael O'Leary said that the airline could add up 15 new routes each year over the next four years.