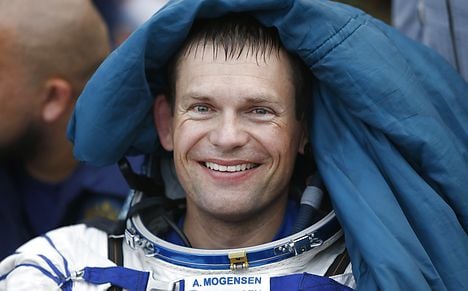 Andreas Mogensen smiles as Russia's space agency ground personnel help him shortly after he landed in a remote area outside the town of Zhezkazgan in Kazakhstan on Saturday. Photo: Yuri Kochetkov/AFP/
Andreas Mogensen, the first Dane in space, returned safely to Earth with two other astronauts from the International Space Station on Saturday.
Along with Mogensen was Russian cosmonaut Gennady Padalka, who landed back on our planet with the record for having spent the most time in space, and Kazakh cosmonaut Aidyn Aimbetov. Padalka has spent a total of 879 days in space over five separate trips.
The capsule carrying the three men touched ground on the barren Kazakh steppe on schedule at 0051 GMT.
“Landing has taken place,” a spokesman for Russia's space agency Roscosmos told AFP. “All is well.”
A replay of the landing can be seen below. The Soyuz capsule lands at the 6:35 mark and Mogensen emerges at around 9:00.
Padalka led the 44th expedition at the ISS, breaking a 10-year-old record for the total number of days spent in the cosmos on June 28 when he surpassed the figure of 803 days, nine hours and 41 minutes achieved by Sergei Krikalev, another Russian.
His most recent mission began on March 27 when he blasted off from the Baikonur cosmodrome with compatriot Mikhail Kornienko and American Scott Kelly.
Mogensen and Aimbetov had a comparatively short stay at the ISS having entered space in the Soyuz TMA-18M on September 2 and docking two days later on September 4.
“I feel fine,” said Padalka as he sat sipping tea and nibbling on an apple surrounded by Russian space officials following his historic re-entry.
“Now you need to live on earth for a little bit,” joked Talgat Musabayev head of the Kazakh space agency Kazcosmos and a veteran of three space flights.
Padalka made four trips to ISS in total. His first ever journey into space was to visit Russia's Mir space station in 1998. The Mir visit was matched in duration only by his second visit to ISS in 2009, with both lasting 199 days. He is the only person to command the ISS four times.
The three-man crew completed a “perfect” de-orbit burn to re-enter the earth's atmosphere at just after 00.00 GMT according to NASA television before a “bullseye landing” roughly 146 kilometres (90 miles) southeast of the Kazakh settlement of Dzhezkazgan less than an hour later.
“That's it guys you can relax now” Padalka said to his crew as the landing approached.
The trio are being taken to the airport in the Kazakhstani capital of Astana where they will be received by Kazakh President Nursultan Nazarbayev.
Space travel has been one of the few areas of international cooperation between Russia and the West that has not been completely destroyed by the Ukraine crisis.
But the joint space program has still faced difficulties this year. Russia put the breaks on all space travel for almost three months after the failure of the unmanned Progress freighter in late April.
The doomed ship lost contact with Earth and burned up in the atmosphere, forcing a group of astronauts to spend an extra month on the ISS.
In May, another Russian spacecraft, a Proton-M rocket carrying a Mexican satellite, malfunctioned and crashed in Siberia soon after its launch.
The roughly $150 billion ISS has been orbiting the earth at roughly 28,000 kilometres per hour since 1998.