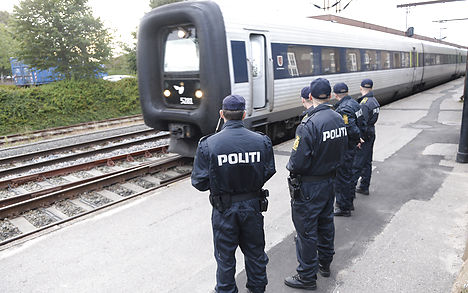 Danish police await a train arriving in Padborg on Thursday morning. Photo: Claus Fisker/Scanpix
Rail operator DSB will normalize traffic between Denmark and Germany on Thursday after temporarily cancelling all service on Wednesday. However, a busy ferry crossing would remain closed to trains, a day after hundreds of migrants refused to disembark from services arriving from Germany, Denmark's southern neighbour, demanding to continue on to Sweden instead.
See also: DSB cancels German trains amid migrant influx
The refugees refused to register with Danish authorities, which would mean having to apply for asylum in Denmark or returning to Germany, preferring instead to seek asylum in Sweden, where asylum conditions are more generous.
Sweden, one of many European countries struggling with the worst migration crisis since World War II, has become a top EU destination for refugees by issuing permanent residency to all Syrian asylum seekers.
In contrast, Denmark has sought to reduce the influx by issuing temporary residence permits, delaying family reunions and slashing benefits for newly arrived immigrants.
DSB said in a statement that services to Germany running through the border town of Padborg would run as normal Thursday while the ferry crossing remained closed to trains “due to police work at the borders”.
The announcement came after two trains carrying around 350 refugees spent Wednesday stuck in Rødby, on Scandinavia's busiest ferry crossing to Germany, around 135 kilometres southeast of Copenhagen.
After lengthy negotiations, around 100 of them agreed to remain in Denmark and lodge their asylum request there.
The 240 or so others were allowed to disembark late Wednesday without police intervening.
“Where they have gone I don't know. I think they were picked up by private cars or have taken taxis further away. We are no longer monitoring them,” police commissioner John Andersen told news agency Ritzau.
“We didn't want to empty the train by force,” he added.
Meanwhile, ferry operator Scandlines announced that only passengers travelling by car would be let aboard ferries between Rødby and Puttgarden in Germany. The ferries usually carry both cars and trains.
Police on Wednesday also closed part of a motorway near Padborg for a few hours after around 300 refugees, including large numbers of women and children, set off on foot for Sweden.
The migrants had been housed in an old school building after arriving in the town but took to the road, saying they wanted to travel north to Sweden.
Some elderly migrants called off their 300-kilometre (180 mile) trek to Copenhagen, the jumping-off point for crossings by bus, train or car to Sweden.
On Wednesday afternoon, the rest of the group left the motorway to spend the night in a local community.