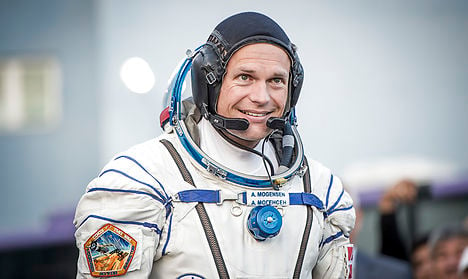 Andreas Mogensen. Photo: Asger Ladefoged/Scanpix
The first Dane in space arrived on Friday at the International Space Station (ISS) as part of a three-man team after an unusually long voyage from Earth, the Russian space agency said.
Danish astronaut Andreas Mogensen, accompanied by Russian cosmonaut Sergei Volkov and Aidyn Aimbetov from Kazakhstan, had taken 26 custom-made figurines from Danish toymaker Lego on the ride to the station.
The trio blasted off aboard a Soyuz rocket from the Baikonur cosmodrome on Wednesday but the trip lasted two days instead of the usual fast-track six hours after the ISS raised its orbit to avoid space debris.
They joined six astronauts already in space, bringing the total number of people on the ISS to nine, for the first time since 2013, according to the European Space Agency.

9 humans from 5 nations together in space #iriss pic.twitter.com/euH3T0IbRt

Mogensen will complete around 20 research projects during his eight times on the ISS. The Dane will test a new Skinsuit developed by the European Space Agency (ESA) to minimize the negative effects of weightlessness on the body and will launch two small satellites created by Aalborg University to monitor ship traffic in the Arctic.
According to the ESA, Mogensen will carry out 50 hours of research at the ISS, whereas astronauts normally do about 80 hours of work over a six-month mission. Volkov is expected to remain in orbit until March 2016, along with Russian cosmonaut Mikhail Kornienko and US astronaut Scott Kelly who are already aboard the ISS.
Accompanied by veteran Russian cosmonaut Gennady Padalka, first-time flyers Aimbetov and Mogensen will return to Earth next week after 10 days on the station.
Aimbetov, who replaced British singer Sarah Brightman after she pulled out of the mission in June, is the third astronaut from Kazakhstan, which hosts Russia's cosmodrome.
The trio led by Padalka, who has been in orbit since June, are set to leave the orbiting space station on September 12.
Upon his return to Earth, Padalka will have spent 878 days — or roughly 2.5 years — in space, setting a record for spending the longest time in space.
Russia is the only country still sending its own craft to the ISS after NASA ended its space shuttle  programme in 2011 and turned to private firms to fly supply missions there.
The arrival at the ISS can be seen below: