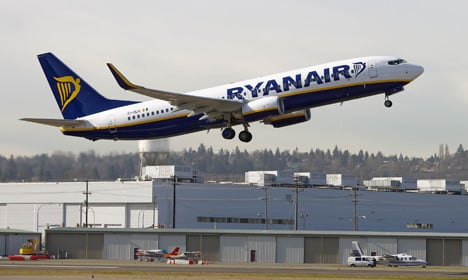 Ryanair said it could have 60 Copenhagen routes by 2019. Photo: Ryanair
Ryanair set a passenger record in August with some 55,000 travellers using the airline to fly in and out of Copenhagen. The brisk sales come after the airline closed its base in the Danish capital after a prolonged battle with labour unions.
“We’ve had a ton of bad publicity but customers love our low prices,” Ryanair CEO Michael O’Leary said at a Tuesday press conference in Copenhagen.
O’Leary said that despite relocating its Copenhagen base to Lithuania, it still plans a massive expansion out of Denmark’s largest airport over the next three to five years.
Ryanair announced a new route from Copenhagen to Porto on Tuesday and said that the airline could be flying up to 60 routes in the near future, carrying 10 million passengers a year in and out of the Danish capital.
“Ryanair continues to grow in Copenhagen and we look forward to further growth in Danish tourism, traffic and jobs,” O’Leary said in a press release.
Ryanair released its summer 2016 schedule on Tuesday, which included 15 Copenhagen routes. O'Leary said that the airline could add up 15 new routes each year over the next four years.
While Ryanair has growth ambitions in Copenhagen, it said it would be further cutting down its routes from Billund Airport to just two or three winter routes.
“That is an example of the consequences of the labour union’s misguided fight for the silly Danish model,” O’Leary said in Copenhagen, according to broadcaster DR.
Ryanair announced in July that it will close its base at Billund Airport due to Danish unions’ plans to carry out a strike at the airport. That closure came just days after the airline officially shut down its Copenhagen base in order to avoid an action from the unions.