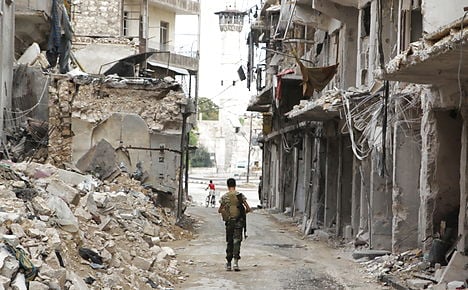 An individual who travelled to Syria's war zone has lost the right to reside in Denmark. Photo: Abdalrhman Ismail/Scanpix
The Danish Immigration Service (Udlændingestyrelsen – DIS) has revoked the residence permit of a so-called ‘Syria fighter’, marking the first time that a law passed in March of this year has been used to rescind an individual’s legal residency in Denmark.
The new law gives police the right to confiscate passports and impose travel bans on Danish citizens suspected of planning to travel to Syria or Iraq to fight.
See also: Police seize passports of 'foreign fighters'
Danish police have used the same law three times since its passage to confiscate the seize the passports of a total of five Danish citizens. East Jutland Police reported just last week that they had used the new law to take the passports of three individuals who they suspected were planning to engage in armed conflict abroad.
DIS confirmed to broadcaster DR that it had used the new legislation to strip the residence permit from a person who is suspected of having fought in Syria. No further details were released.
The so-called 'passport law' has been criticized by some terror and legal experts who argue that the grounds for confiscating passports and residence permits are too vague.
Justice Minister Søren Pind hailed the action as a sign that the new Venstre government's policies were beginning to pay off.
“Forward step by step. Some yell and talk, others take action. […] For the first time, a Syria fighter has lost their Danish residence permit. And we haven't even really begun yet,” Pind wrote on Facebook.