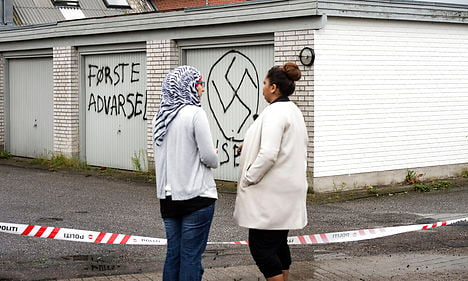 Around 120 asylum seekers live in the centre. Photo: Bo Amstrup/Scanpix
Unknown perpetrators vandalized the Red Cross’s Lyngbygaard asylum centre in the early morning hours of Thursday with a swastika and a message that this was the centre’s “first warning”, East Jutland Police said in a press release.
A minibus used by the centre, which hosts around 120 asylum seekers, was also set on fire. According to police, the car fire did not pose any danger to the centre’s residents.
Along with the swastika and warning, the graffiti on the building's garage also included the initials DNSB, short for ‘Danmarks Nationalsocialistiske Bevægelse’ or the National Socialist Movement of Denmark.
Police said that the asylum centre has also been previously been targeted by vandals.
“This is the third time that the asylum centre has been subjected to vandalism with an apparent political motive,” police wrote.
The other two incidents occurred on March 20th and July 31st and according to TV2, the initials ‘DNSB’ were also spray-painted on the building in the previous attacks.
Police said on Thursday that they believe that the same people were behind all three incidents of vandalism but had not identified any potential subjects.
A volunteer at the asylum centre said the first two incidents were largely written off as pranks.
“But it isn’t that now that a car has been set on fire,” Erik Boye Kirk told broadcaster DR, adding that the “cynical” people who vandalized Lyngbygaard were likely inspired by recent events in Germany. A police investigator searches the scorched minibus for clues. Photo: Bo Amstrup/Scanpix
On Tuesday evening in northern Germany, two drunk men broke into a refugee housing block carrying a knife and an unknown attacker set a fire in a building that was scheduled to be used as refugee accommodation in Leipzig. That fire was the third within a week set at a refugee and asylum-seeker home in Germany.
Germany also saw violent clashes between far-right protesters and police over last weekend in Saxon in what Chancellor Angela Merkel condemned as “repulsive” and “shameful”.
A map from Berliner Morgenpost shows the attacks on refugee housing in Germany since February:

A map of attacks on #refugee shelters in Germany. Staggering. http://t.co/qWhdAbA2FP pic.twitter.com/56oljpSFWX