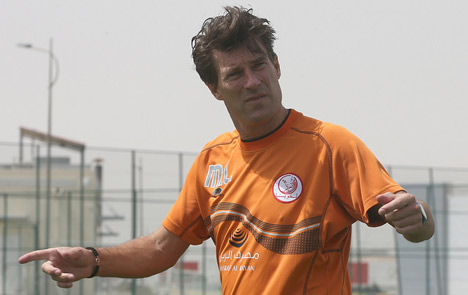 Could Laudrup be back in red and white soon? Photo: Doha Stadium Plus Qatar/Flickr
Tabloid BT reported on Thursday that Danish football legend Michael Laudrup could be the next coach of the national team.
Laudrup was reportedly contacted by the head of the Danish Football Association and is one of ten candidates for the job, which will be vacated by Morten Olsen after next year’s European championships.
The 51-year-old Laudrup is not only universally considered the best Danish football player ever, he also recently topped current Swedish star Zlatan Ibrahimovic in a poll among leading sporting journalists and pundits for the title of the best footballer to ever come out of Scandinavia.
Laudrup played for several top European clubs during his career including rival Spanish sides Real Madrid and Barcelona and scored 37 goals in 104 international matches for Denmark.
Laudrup left his post as manager of the Qatar team Lekhwiya after just one year earlier this summer. Even if Denmark does try to lure him home, they will have to compete with Mexico.
Sources recently told ESPN that  Laudrup is a finalist to coach the Mexican national team and is “keen on the position.”
Olsen announced in March that he will step down after the Euro 2016 tournament. The 65-year-old has steered the national side through more than 150 matches, a remarkable run given the longevity of most football managers.
The Euro 2012 tournament was the fourth time he guided the Danes to a major championships since taking over in 2000, but he failed to qualify the team for the 2014 World Cup in Brazil.
Denmark is currently in second place in Group I in the Euro 2016 qualifiers. The club’s next match is against Albania on September 4th in Copenhagen’s Telia Parken.