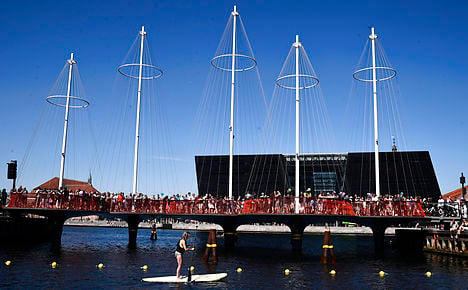 The Circle Bridge was officially opened on August 22. Photo: Emil Hougaard/Scanpix
Around 7,000 residents of the Danish capital turned out for the official opening of the Circle Bridge on Saturday.
The bridge will give cyclists and pedestrians a new and more direct way to cross Christianshavn Canal and is part of the city’s overall plan to make getting around Copenhagen’s inner harbour area easier.
Designed by Danish-Icelandic artist Olafur Eliasson, the 32-metre long swing bridge is made up of five staggered circular platforms. The different-sized platforms all have their own masts and three of the five circles will be movable in order to make way for large boat traffic.
See photo gallery of Saturday's opening
Some 5,000 daily cyclists and pedestrians are expected to use the bridge, which was funded entirely by Nordea-fonden.
The project was hit by numerous delays since its announcement in 2011 and opened to the public nearly three years later than planned.
The Circle Bridge is Copenhagen's fourth new bridge since Cykelslangen opened in mid-2014, helping to cement the Danish capital's position as the world's best city for cyclists.
The long-awaited and thoroughly delayed Inderhavnsbroen finished construction earlier this month and is scheduled to open to bike and pedestrian traffic in mid-October.  The city has also revealed plans for a new bridge to run next to the heavily-trafficked Langebro.
Click through on the photo below for photos of the Circle Bridge's opening on Saturday.