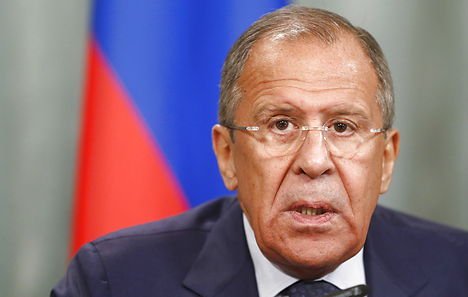 Danish FM Kristian Jensen said he wants to engage his Russian counterpart Sergey Lavrov (pictured) on a number of topics. Photo: Maxim Zmeyev/Scanpix
Foreign Minister Kristian Jensen told Jyllands-Posten on Friday that he plans to reopen political dialogue between Denmark and Russia. Jensen said that the Russians have requested a top-level meeting between the two countries and he intends to accept the invitation.
“The direct dialogue has been frozen in regards to having meetings at various levels. But if we are to tell them our opinions, we need to have them in a room where they can listen to us. Therefore it’s my intention to reopen an active dialogue with Russia,” the minister said.

“Denmark needs dialogue with Russia in order to gain influence in regard to Ukraine, etc. and to cooperate on the Baltic Sea, among other things,” he wrote on Twitter.

Tensions between the two countries have been high in recent months, with increased Russian activity in and around Danish air space and even a warning from Russia’s ambassador to Denmark that the Danes have made themselves a target of a potential nuclear attack by joining Nato’s missile defence system.
See also: Russia delivers nuclear threat to Denmark
Russia and Denmark have also laid conflicting claims over the North Pole and it Russia has made not one but two separate simulated attacks on the Danish island of Bornholm.
Jensen said that despite the shaky relationship, Denmark must find a way to constructively deal with Russia.
“Even though Russia is a major threat, we can’t find a crane large enough to move it. Russia is situated geographically where it is and that means that we need to deal with it,” he told Jyllands-Posten.
The Danish foreign minister said he wants to take up a number of topics with his Russian counterpart, Sergey Lavrov.
“It won't be a dialogue where we just sit and listen. It will be a dialogue in which we deliver messages,” he said.
Russia has been at odds with the West since its military incursions into Ukraine in 2014 and the Danish Defence Intelligence Service (Forsvarets Efterretningstjeneste – DDIS) warned off “a new frozen European conflict” with Russia in its 2014 national risk assessment report.