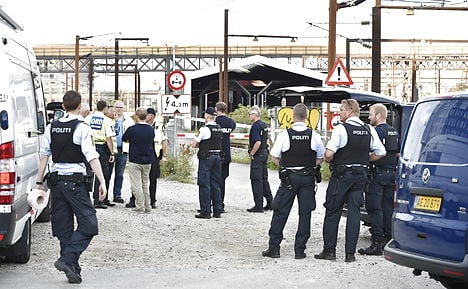 A large police presence has been on the scene near Copenhagen Central Station since the early hours of Friday. Photo: Bax Lindhardt/Scanpix
A DSB employee was attacked by two men and bound with tape shortly after 4am on Friday, Copenhagen Police said. The male employee’s colleagues found him tied up in a train and the assaulted employee gave police information that led them to carry out a full-scale search, complete with a bomb-sniffing dog.

The above tweet from Copenhagen Police reads: “DSB employee assaulted by two men in a train. Bound with tape. His colleagues freed him and called us. Broad investigation underway.”

Police closed off the area surrounding Copenhagen Central Station, completely shutting down all train traffic. Trains were operating again as of just before 9am but DSB said that delays could continue for hours on Friday.
A bomb-sniffing police dog searched the area between Central Station and Dybbølsbro Station, but as of 8.30am police had not said anything about the search results.
No arrests have yet been made.