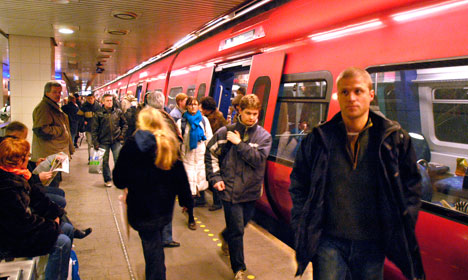 The Wednesday morning incident occurred at Nørreport Station, Denmark's busiest travel point. Photo: René Strandbygaard/DSB
A 25-year-old Italian man is recovering after being struck by an S-train at Nørreport Station on Wednesday morning, police officials say.
A spokesman for the Copenhagen Police said that the man, presumed to be in Copenhagen as a tourist, lost his balance and fell on to the tracks.
“Our investigation shows that he fell down onto the tracks as a result of his own carelessness,” Copenhagen Police spokesman Lars Westerweel told BT.
“He was operated in the stomach and abdomen region at Rigshospitalet and is out of critical condition,” another police spokesman, Jens Kristiansen, later added.
Kristiansen said that police consider the incident to be an accident brought about by “carelessness” and they do no suspect any foul play or that the tourist was under the influence of drugs or alcohol.
The incident caused numerous cancellations and delays in the Copenhagen area but after a few hours trains were once again running as scheduled.