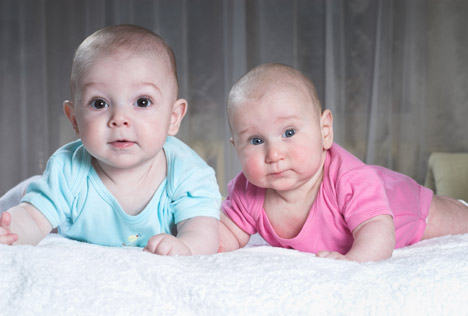 Odds are these babies are named William and Emma. Photo: Colourbox
The most popular names for children born in 2014 in Denmark were William and Emma, Statistics Denmark’s annual overview released on Tuesday showed.
William was the most popular boys’ name for the fifth consecutive year, with 21 of every 1,000 Danish boys being given the name. Three new names topped the top 50 for boys last year: Nohr, Sander and Asger.
Emma has been a steady presence among the top five girls’ names for 20 years now but reclaimed first place for the first time since 2011. In 2013, the most popular girls’ name was Sofia, which fell to number two last year. The new names among the top 50 for girls were Signe, Liv, Alba and Aya.
Although William and Emma won on a national level, there were significant regional differences. Ella was the most popular girls name in the Capital Region (Region Hovedstaden) while Olivia was the most popular choice for girls among Copenhagen parents. In central Jutland, parents preferred Sofia, Ida and Laura to Emma.
On the boys’ side, William was the most popular choice in two of Denmark’s five regions. In the Capital Region, it was Oscar while Zealand parents preferred Noah and those in northern Jutland liked Malthe. Only in Copenhagen did William fail to make the top five. There, Carl was the big winner.
The most popular baby names in 2014 at the national level were as follows.
Top ten girls’ names
Emma
Sofia
Ida
Freja
Clara
Laura
Anna
Ella
Isabella
Karla
Top ten boys’ names
William
Noah
Lucas
Oscar
Victor
Malthe
Emil
Frederik
Oliver
Magnus

STATISTICS
Why are Danish women and men so tall?
Url copied to clipboard!