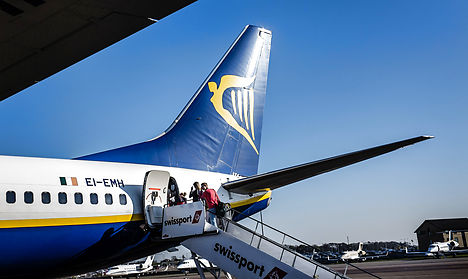 Photo: Thomas Lekfeldt/Scanpix
Irish low-cost carrier Ryanair on Friday announced the closure of its recently opened base in Copenhagen to avoid a strike by Danish unions, but said it would continue to fly from the airport.
The airline said in a press release that it will relocate its Copenhagen base to Kaunas, Lithuania on July 14th. This would make the unions’ planned strike on July 18th illegal, the airline wrote.

“John Dybart of the Danish unions this week claimed that 'Ryanair was bluffing' when we threatened to close the whole Copenhagen base. Perhaps now he will realise that the Danish economy and the Danish unions cannot succeed by forcing Danish jobs overseas,” airline spokesman Eddie Wilson wrote in the press release.

“Perhaps Mr. Dybart will now call for the Danish offices of Google, Microsoft, Facebook and other non-union companies in Denmark to be closed since their employees, like Ryanair and other multinationals, don’t recognise Danish unions either,” Wilson added.

Ryanair had previously warned that it will drop its Copenhagen base if the airline fails to reach an agreement with the unions, and following Wednesday’s short-lived and unfruitful meeting between the parties, the airline is now also threatening to end its operations at Billund Airport as well.

Ryanair's only Copenhagen-based aircraft would be stationed in Kaunas in Lithuania starting on Tuesday, the company said.
See also: Unions to target Ryanair at more Danish airports
It was unclear if Ryanair would continue to base aircraft at the Billund and Aarhus airports in western Denmark, where the Danish Confederation of Trade Unions (LO) has said a strike will begin on July 23rd.
Ryanair has operated for years without any conflicts at the two airports, where it faces less competition and staff have fewer job opportunities.
Wilson said that the airline could very well end up leaving Billund as well.

“We have made it very clear that if there are sympathy actions in Copenhagen that affect Billund we will not accept it and in such case Billund could also be closed,” airline spokesman Eddie Wilson told DR on Wednesday.

LO took Ryanair to the Danish Labour Court (Arbejdsretten) to determine whether the airline needs to adhere to Danish or Irish rules while operating at the Copenhagen Airport. The court ruled in LO's favour, clearing the way for a legal strike against Ryanair.

In May, Copenhagen Mayor Frank Jensen said city employees were banned from using the airline, citing his administration's policy on companies that engage in “social dumping”. The announcement set off a public war of words that played out on Twitter.
In October a French court found Ryanair guilty of paying workers under Irish contracts to save money on payroll and other taxes and ordered it to pay 8.1 million euros (60.4 million kroner, $9.1 million) in damages and fined it 200,000 euros for breaching French labour law.
The airline had argued that it did not have a permanent base at Marseille-Marignane airport, but prosecutors said its claim was not credible since it had offices there and workers were living locally.