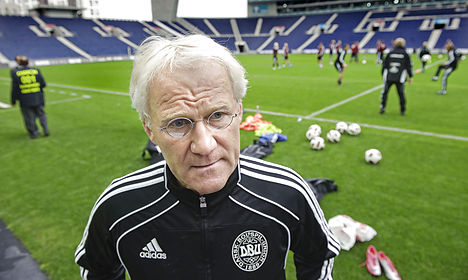 Morten Olsen's team is suddenly facing a harder road. Photo: Jens Nørgaard Larsen/Scanpix
The Court of Arbitration for Sport (CAS) on Friday awarded Albania with the victory over Serbia in a reversal of a previous Uefa decision regarding the teams' drone-suspended match in October.
The European Championship qualification match between Serbia and Albania was stopped by the referee when a drone with a political banner flew into the stadium. During this stoppage, there were serious incidents between Serbian fans and Albania's players.
CAS said on Friday that it was unable to confirm that the referee issued a “clear, direct and unconditional order to the players to resume the match on the basis of a definite decision that safety had been assured”.
Originally, neither team was awarded any points in the cancelled match, which was ruled a 3-0 Serbia victory. But CAS's decision put the responsibility for the stoppage on Serbia and the match has now been declared Albania has been awarded the 3-0 win in the Euro 2016 qualifying group.
“The Panel found that the match stoppage and the eventual abandonment of the match were caused by security lapses of the organizers and acts of violence exerted on the Albanian players by the Serbian fans and at least one security steward,” the CAS ruling stated.
The ruling now ties Albania with Denmark in the second-place of Group I, which is lead by Portugal. Denmark´s football team is now under extra pressure to win its next match against Albania on September 4th. Otherwise Denmark´s presence in next European Championship could be in jeopardy.

Denmark's national coach Morten Olsen, who will be retiring at the end of Euro 2016, was upset by the reversal.

“It is sport politics and lobbyism and we can't doing anything now. I don't understand the decision,” Olsen told Danish sports site Tipsbladet. “It is now much harder to make it to Euro 2016 and that is unfortunate.”
Footage of the drone incident can be seen here: