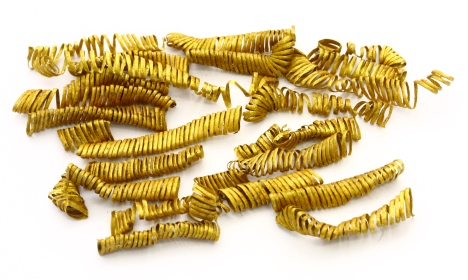 The golden spirals are each approximately 3cm long and weigh 0.1 grams each. Photo: Vestsjællands Museum.

The Danish National Museum announced on Wednesday that archaeologists have uncovered a trove of gold spirals that may have been used for religious ceremonies during the Bronze Age, when the Danes’ ancestors worshiped the sun.

The spirals were recovered from a site that had been excavated before, where a team found four gold bracelets. Amateur archaeologist Christian Albertsen offered to continue searching the area on behalf of the local West Zealand Museum, believing there was more to be found – and he turned out to be right.

See also: Danish Bronze Age girl may have been German

Each spiral is made up of pure gold thread and measures up to three centimeters in length. The entire find weighs between 200-300 grammes.

Archaeologists are still unsure what the spirals may have been used for, as this is the first time such a find has been made in Denmark.

“Maybe the spirals were fastened to threads lining a hat or parasol. Maybe they were woven into hair or embroidered on a ceremonial garb. The fact is that we do not know, but I am inclined to believe that they were part of a priest-king’s garb or part of some headwear,” Flemming Kaul from the Danish National Museum said in a press release.

The excavation area – located in the Boeslunde district in southwestern Zealand – has been a veritable treasure trove of archaeological finds. This latest discovery makes it the area where the most gold jewellery and artefacts – in terms of sheer weight – have been recovered from the north European Bronze Age.

See also: Vikings were in Denmark earlier than thought

Kirsten Christensen from the West Zealand Museum said that besides the spirals and gold bracelets, six golden bowls were discovered in the area by local farmers in the 1800s.

“It shows that this place had a very big significance for Bronze Age people when they chose to sacrifice several kilos of gold here,” said Christensen.

Flemming Kaul from the National Museum also believes that the area had some sort of religious significance as a place where Bronze Age worshippers carried out rituals and sacrifices to the higher powers.

“Maybe the priest king had a golden bracelet around his wrist, and the gold spirals adorned his cape or his hat, where during rituals they shone like the sun. The sun was one of the holy symbols in the Bronze Age and gold was presumably seen as having some sort of particular magic power. It is colored like the sun, it shines like the sun, and because gold lasts forever, it was also seen as containing some of the Sun’s power,” Kaul said.

Archaeologists from both the National Museum and West Zealand Museum are convinced that there is still more golden treasure to be found at Boeslunde.