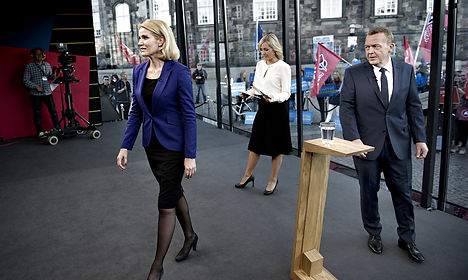 Two veterans of Danish politics have decried the manner in which many of the parties have conducted their campaigns as well as how the media has covered the election.

“It has been a sad election. It has not been very enlightening. There have been four debates between two people, who mostly bickered and did not want to listen to each other,” said Conservative MP Per Stig Møller to DR, referring to the four TV-debates between Prime Minister Helle Thorning-Schmidt and opposition leader Lars Løkke Rasmussen.

The relatively high number of one-on-one debates between the leaders of the Social Democrats and Venstre has also been lamented by other political parties, as it has been regarded as an attempt by the Danish media to transform the country’s election into an American-style face-off between two opposing sides.

“It is a distortion of the Danish system when you turn it into a presidential election with red and blue, as if it were Republicans and Democrats. That is not how it works in Denmark. Both the red and blue blocs are comprised of several parties that have to figure out how to work together after the election,” argued Møller, who will not be running in this election.

Social Democrat MP Ole Sohn, who has also decided against running in this election, echoes Møller’s sentiments, although he primarily takes issue with the way the candidates have conducted themselves throughout the campaign.

“My impression is that the political discourse is increasingly beginning to revolve around highlighting flaws in other candidates and criticizing them rather than proposing solutions. I believe that is a negative development,” he told DR.

“The challenges that Denmark faces requires that the parties are better able to cooperate with one another in parliament than they have indicated during this election,” Sohn said.

The change in political discourse has seemingly also been picked up on by voters. In a recent survey conducted for political site Altinget, just 28 percent of Danish voters said that they trust the nation’s politicians. That marks the lowest recorded level of trust ever.

“Denmark has always been among the countries in the world where the trust in politicians has been highest. Now we have fallen far down the list. Trust is the glue that holds a society together and when that disappears, it begins to affect the foundation for democracy,” University of Copenhagen professor Kasper Møller Hansen told Altinget.
Hansen placed the blame for the fall squarely on the politicians themselves.
“The tone in recent years has become harder and harder. One accuses the other of broken promises and passive policies and that creates an image in the mind of voters that that’s just the way politics works,” he said.