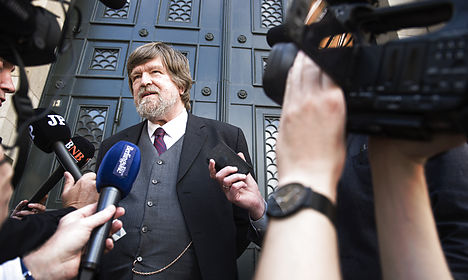 Journalist Jørgen Dragsdahl. Photo: David Leth Williams/Scanpix
In 2007, Bent Jensen, a former history professor at the University of Southern Denmark, claimed that Jørgen Dragsdahl, a security and defence correspondent at left-leaning newspaper Information, had been a KGB agent in the early 1980s.
“The archives have shown that Jørgen Dragsdahl was a KGB agent,” Jensen wrote in right-leaning daily Jyllands-Posten.
Shortly after, Dragsdahl filed charges against the writer for defamation and the case rumbled on through the court system until June 3, when the Supreme Court of Denmark found Jensen guilty and sentenced him to pay a 10,000 kroner (1,341 euros, $1,506) fine, 100,000 kroner in damages and around 500,000 kroner in legal costs for the claimant.
The Supreme Court argued that Jensen “was aware that the Danish Security and Intelligence Service [PET] after an extensive investigation concluded that there was no basis… for pressing charges against Jorgen Dragsdahl.”
But Jensen said he had merely claimed the journalist was an “agent of influence”, meaning his job was to influence public opinion, which would have been legal in Denmark.
“I have never in my writing claimed that what Dragsdahl did was illegal,” Jensen told AFP.
The ruling “is wrong and that's why it will be brought to the European Court of Human Rights,” Jensen's lawyer, Karoly Nemeth, said.
Oleg Gordievsky, a former colonel in the KGB who defected to Britain in the mid-1980s, told Danish tabloid Ekstra Bladet in 1992 that Dragsdahl had been an agent, but in 1994 the story was retracted after the paper reached a settlement with the journalist.
Some right-wing commentators and politicians in Denmark believe the country's reservations against some Nato policies during the Cold War, such as the stationing of nuclear missiles in Europe in the 1980s, was the result of Soviet influence on decision makers.
Dragsdahl himself has said his contacts with the Soviet intelligence agency were due to his relationship with a Soviet woman he wanted to bring to Denmark for personal reasons.
“I have been unemployed. From 2006 to 2007 my income from journalism fell to a tenth of what they were,” Dragsdahl told AFP.
“It's crystal clear that what Jensen wrote was a lie,” he added.