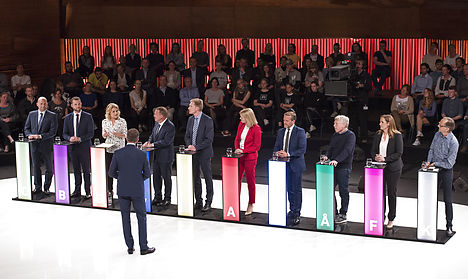 The leaders of Denmark's ten main political parties squared off on Tuesday. Photo: Claus Bech/Scanpix
Denmark's centre-left government and right-wing opposition are neck and neck in the polls ahead of Thursday's general election, with Prime Minister Helle Thorning-Schmidt staging a major comeback thanks to a resurgent economy.
The election campaign has been dominated by the economy and Danes' cherished cradle-to-grave welfare state, as well as immigration, the traditional battle horse of the far-right Danish People's Party (DF).
See also: Economy, welfare take centre stage in election
On Tuesday, a poll published in the daily Jyllands-Posten credited the right-wing bloc with 49.9 percent of votes and the centre-left bloc with 50.1 percent. In another survey in the broadsheet Politiken, the right was seen winning 50.2 percent and the centre-left 49.8 percent.
“With Helle Thorning-Schmidt, there is a 'prime minister effect': people see her as the head of government more than [opposition leader] Lars Løkke Rasmussen and that works in her favour, but it doesn't mean she's going to win,” said Danish political science professor Drude Dahlerup of Stockholm University.
“The two issues that are going to be decisive in the election are welfare and immigration,” said Kasper Hansen, a political science professor at the University of Copenhagen.
“If it's going to be welfare, the Social Democrats and the Social Liberals will have an advantage. If it's going to be immigration which is decisive in the voter's mind” the opposition will win, he predicted.
See also: Immigration debate in focus as election nears
Thorning-Schmidt called the election on May 27, the same week her government declared an end to a protracted economic crisis that saw house prices fall by 20 percent as Danish households struggled with the world's highest debt burden.
In May, the government raised its growth forecast for 2015 to 1.7 percent, and said it expected the economy to grow by a whole two percent next year.
Thorning-Schmidt, 48, has disappointed many left-wing voters by cutting taxes and keeping in place some of her predecessor's controversial benefit cuts. But the resurgent economy helped her bloc claw back around seven percentage points from the opposition in opinion polls within days after the election announcement.
See also: PROFILE: Thorning fights for second term as PM
By successfully focusing the debate on Denmark's cherished welfare state, she managed to give her side a narrow lead in the two weeks that followed.
Opposition leader Lars Løkke Rasmussen, who led the country between 2009 and 2011, shed support over a series of minor scandals and for allegedly exaggerating how little a Danish worker on social benefits stood to gain from accepting a job.
See also: PROFILE: Rasmussen banks on experience
Tough on immigration
Earlier this year, Thorning-Schmidt took a tough stance on immigration in a controversial advertising campaign with the slogan: “If you come to Denmark you should work”, referring to the relatively high unemployment rate among Danish immigrants.
Last year, her government sought to stem the number of asylum seekers coming to Denmark from conflict zones like Syria by introducing temporary residence permits for refugees and making it harder to obtain family reunification visas.
Still, many voters believe the opposition, which includes the anti-immigration Danish People's Party (DF), is a better choice on immigration.
Denmark already has some of Europe's strictest laws on immigration after years of right-wing governments relying on the support of the DF, allowing it to shape migration policies in return for its backing on legislation.
See also: The rise and rise of the Danish People's Party
DF is expected to garner just over 18 percent in Thursday's election, compared with 12.3 percent in the last vote, but few believe it will seek to join a future government, given its disagreement with its right-wing allies on European issues and welfare spending.
February's attacks in Copenhagen by gunman Omar El-Hussein, who shot dead a filmmaker outside a free speech event and, later, a Jewish security guard outside a synagogue, have been largely absent from the campaign but they kept immigration on the agenda.
Lower benefits
As the campaign neared its final week Rasmussen and the three parties that back his Venstre party in parliament announced a package aiming to make Denmark a less attractive destination for asylum seekers.
A future right-wing government would crack down on immigration by lowering benefits for newly arrived immigrants and only granting permanent residency to those who have a job and speak Danish.
The legislation would be fast-tracked in government this summer to “bring the asylum influx under control,” Rasmussen said.
A surge in the number of people fleeing Syria's civil war pushed up the number of people applying for asylum in Denmark to 14,680 last year, compared to 2013 when 7,170 sought asylum.
That made it the EU's fifth largest per-capita recipient of asylum seekers, but still far behind neighbouring Sweden, which took in 81,180 refugees.
See also: Løkke: 'We have a problem with integration'
“Almost 50 percent of the people in Denmark with a non-Western background are on certain kinds of public support,” Rasmussen said at a press conference on Monday.
“I think it's fair to say that in order to pave the way for better integration into our society we need to control the influx,” he added.