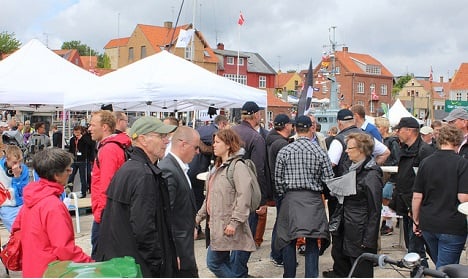 1. So what’s it all about?
The People’s Meeting (Folkemødet) is an annual 4-day festival for political junkies where, as the name implies, Danes get the opportunity to meet their politicians face-to-face. The basic concept is to strengthen the democratic dialogue between residents and politicians by serving as a platform for debate panels, info sessions and speeches. Since its inception in 2011, the event has grown exponentially, with 22,000 people dropping by the festival daily in 2014, compared to only 3,000 in its first year.

2. Where did the idea come from?
The Swedes, actually. The inspiration came from the Swedish Almedalen political week, held in Gotland every year since 1968. A small delegation of Danish politicians who attended the festival in 2010 were so impressed with the concept that they decided to bring it to Denmark.

3. Where and when is it being held?
Folkemødet will run from June 11th to 14th and is held in Allinge on Bornholm, a sleepy town on an equally sleepy island on the eastern periphery of Denmark. For four days, the town of 1,600 residents will be invaded by well-behaved hordes of politicians, TV-crews, and visitors from all over Denmark. Think Distortion for an older demographic or Roskilde Festival without the music and you’ll have a pretty good idea of what it’s like: more politics and elevated discussions, less loud music and public urination.

4. Why is it being held on Bornholm?
In recent years there’s been a lot of debate about what is referred to as 'Udkantsdanmark', the parts of the country far from big cities like Copenhagen and Aarhus. People living in peripheral regions feel politically marginalized and Bornholm is pretty much as peripheral as it gets, so there’s a symbolic value in the politicians coming there to get in touch with the common Dane.

5. Why has it become so popular?
It’s a unique event in that it’s essentially the one time of year where practically everyone who’s important in politics is gathered in the same place at the same time. This allows a large variety of events, debates, and networking to happen in a transparent fashion that includes the voting public. Everyone wins; the politicians, interest groups and other organizations are given a platform that helps them reach thousands of people, politics is made more accessible to the people, and a little part of peripheral Denmark suddenly gets to have its moment in the sun.
6. Who will be there?
Usually all the big names in Danish politics would be there, but with a very inconveniently timed election taking place on June 18th, many of them have decided to bail. According to Politiko, just 51 MPs will be on Bornholm for this year's festival, compared to 127 last year.
All of the party leaders will still show up to give a speech or two, but will be quickly dashing off again. There’s simply no time for them to get in touch with the common folk in peripheral Denmark this year; there are valuable photo ops to attend and campaigns to run in the regions that really matter. But fret not. It’s still bound to be very interesting, as the People’s Meeting has quite the controversial guest list this year.

7. What’s so special about this year?
The aforementioned controversial guest list, really.

The Danish Free Press Society (Trykkefrihedsselskabet) has invited Dutch politician Geert Wilders, who plans to deliver a speech critical of Islam. Wilders was in the news recently when he was part of a ‘draw the Prophet Mohammed’ event in Texas last month that was attacked by two armed gunmen.

Also participating will be the nationalist Danes’ Party (Danskernes Parti), who will bring along several of their far-right colleagues from around Europe including the Greek neo-fascist party Golden Dawn, for a debate on nationalism.

The Mohammed drawings from Wilders' Texas event may also be displayed, although the mayor of Bornholm has said they are not welcome.

A much higher police presence is also planned for this year due to Wilders’ attendance and the February shootings in Copenhagen. 8. What do people think about that?
As with most touchy, it really depends on who you ask. Some politicians are boycotting the People’s Meeting entirely, while others argue that people should attend the festival but stay away from the events featuring the controversial guests. What most agree on is that a large police presence and higher security precautions may transform the entire character of the festival and scare potential participants away.

Others argue that it will not be the controversial guests that may scare people away, but rather the threat of a terrorist attack by ‘home-grown’ Islamic extremists a la Omar El-Hussein. In their view, the topics that Wilders and Golden Dawn will be discussing are highly relevant to Danish society and politics.

9. What else will be going on?
As said, the head of every Danish political party will be there to deliver a campaign speech on the so-called main stage, but each party will also have tents and/or booths set up where you can walk up and let them try to charm you into voting for them while throwing a multitude of pamphlets your way. There will also be representation from the media, businesses, ministries, non-government organizations, and lobbying groups, all of whom will be putting on their own events, panel discussions and debates to compete for attendees' attention.

The media and NGO sector will also be out in full force. Photo credit: DRs Kulturarvsprojekt/Flickr

10.  Is there anything else that’s special about Bornholm besides the People’s Meeting?
One of the ulterior motives of the Meeting is of course to put Bornholm itself in the spotlight, which is rapidly transforming into a popular tourist destination for Danes and Germans in particular. It’s a beautiful island with a lot of nice beaches, nature, and quaint villages, although all of that may be a bit hard to see owing to the sheer volume of armed police officers and brochure-clutching political junkies.