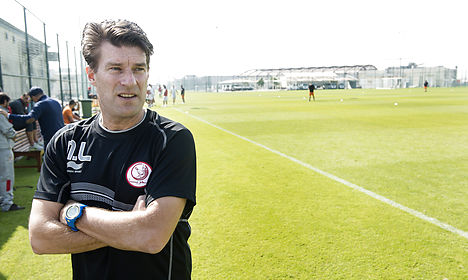 Michael Laudrup currently manages Lekhwiya in Qatar. Photo: Claus Fisker/Scanpix
In a poll amongst some of Scandinavia's leading sporting journalists and pundits put together by Swedish tabloid Aftonbladet, the 50-year-old Laudrup claimed the top spot ahead of Zlatan Ibrahimovic.
Retired Danish stars Peter Schmeichel and Allan Simonsen took third and fourth place, while Jair Litmanen from Finland rounded out the top 50.
Laudrup played for several top European clubs during his career including rival Spanish sides Real Madrid and Barcelona.
He scored 37 goals in 104 international matches for Denmark and is currently manager of Lekhwiya in Qatar.
Laudrup had been rumoured to be eyeing a coaching job with a larger club or even a managerial post in the US, but his agent told Tipsbladet on Monday that he would stick with Lekhwiya for at least one more year.