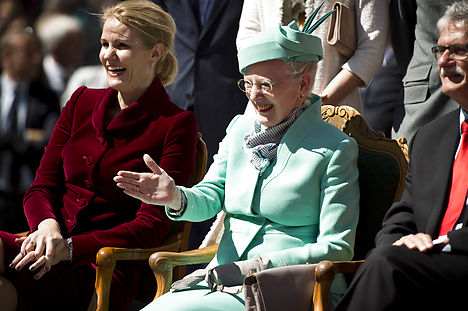 The PM and Queen Margrethe await the arrival of a parade in honour of the 100th anniversary of women's suffrage. To the right is speaker of parliament Mogens Lykketoft. Photo: Nils Meilvang/Scanpix
Friday marked not only Constitution Day in Denmark but also the 100th anniversary of women's right to vote. The constitution that was signed into effect on June 5, 1915 gave both women and servant equal democratic footing with wealthy men and laid the foundation for modern Danish society.
See also: Denmark marks 100 years of women's rights
To mark the occasion, there was a recreation of the 1915 women's march through Copenhagen and speeches from Denmark's two female leaders, Queen Margrethe II and Prime Minister Helle Thorning-Schmidt.
“The constitution whose 100th anniversary we celebrate today was a major breakthrough for Denmark’s democratic development,” the queen said in her address from the steps of Christiansborg.
Click through on the photo for more shots from Friday's events. Story continues below. “With the constitution of 1915 women received their right to vote, even though it certainly did not please those more disposed to old-fashioned ways, including my own grandfather King Christian X. His house was patriarchal and to him women’s equality was almost a foreign concept,” Queen Margrethe said.
The queen said that after thousands of Danish woman marched through Copenhagen to the royal residence at Amalienborg Castle, the king received a delegation of women who wanted to express their gratitude for his signature on the new constitution.
SEE THE PHOTO GALLERY HERE
“During the conversation one of the women in the delegation, who was deeply moved, exclaimed: ‘Your majesty, this is the happiest day of my life!'. To which the King dryly replied: ‘Yeah, I think you should rather go home and make coffee for your husband!' That little exchange summarized quite well the king’s – and also many other Danes’ – view on women’s equality,” Queen Margrethe said.
The entire text of her speech can be read here (in Danish).
Queen Margrethe II wasn’t the only powerful Danish woman to speak in connection to the 100th anniversary.
Click through on the photo for more shots from Friday's events. Story continues below. The PM addressed a private reception at Christiansborg before speaking to the assembled crowd. Photo: Nils Meilvang/Scanpix
Prime Minister Helle Thorning-Schmidt addressed both a private audience in Christiansborg and a ‘people’s party’ outside the parliament building.
“Today we celebrate the 1915 constitution. And we celebrate it so that it can take its well-earned place in Danish history as the constitution that gave women the right to vote and gave Denmark democracy,” she said in her first speech.
“The country we have today is not a matter of course. It required time to come so far. It took determination, it took persistence and it took a fight. Not women versus men but a united fight for freedom and progress,” Thorning-Schmidt said.
“The constitution of 1915 was an essential step for a Denmark with equal opportunities – one of the biggest in our history,” Thorning-Schmidt added.
For more photos from Constitution Day, click through on the photo below. A recreation of the 1915 parade arrives at Christiansborg Slotsplads. Photo: Nils Meilvang/Scanpix