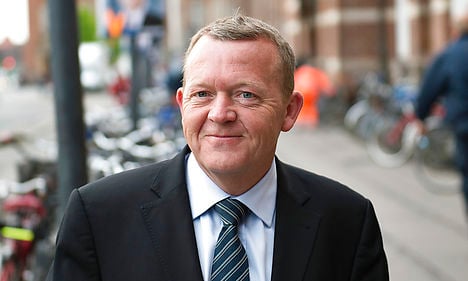 MC Lars. Photo: Nils Meilvang/Scanpix
In an election campaign, politicians will do just about anything to get attention (just see this if you don't believe it).
How else to explain Denmark's former prime minister showing off his rapping ‘skills’ on live radio?
Lars Løkke Rasmussen was on radio station Nova FM Wednesday morning and channelled his inner Eminem with a rap about tax reductions and asylum seekers.
In the clip above, Rasmussen raps the following lyrics, rather loosely translated:
“Work, work, it should pay off/
And you should get a tax cut
If you bust your hump for a salary that isn’t too big/
There will be less of the taxman and more loving care
Asylum seekers, they’re streaming in/
Thorning talks, but doesn’t do anything
We need to take Denmark back/
To my good old prime minister days”
See also: 'I think the Danish minister was drunk'
The former PM isn’t the only one to bust a rhyme on Nova FM. The Danish People’s Party’s leader, Kristian Thulesen Dahl, also paid a vist to drop some bars:

Both men may be better politicians than rappers, but Dahl is clearly the better MC, delivering a jab at Finance Minister Bjarne Corydon’s controversial handling of the partial sale of Dong Energy to Goldman Sachs.
“Corydon, dinge dinge dinge dinge Dong. It is just not good form” (again, it works better in Danish).
Dahl also displayed his party’s strong national pride.
“We want more Denmark and less EU. We are proud of the Danish, Danish, Danish flag,” he rapped to the amusement of Nova FM’s hosts.
The radio station plans to bring in other politicians to spit some rhymes and PM Helle Thorning-Schmidt is reportedly considering the offer. Watch out, Nicki Minaj.